Learn more
Size200mL *Please note that the ABV of this bottle may vary
Made using only locally-sourced ingredients, these seasonal vermouths are reflections of their maker.
Notify me when this product is back in stock. 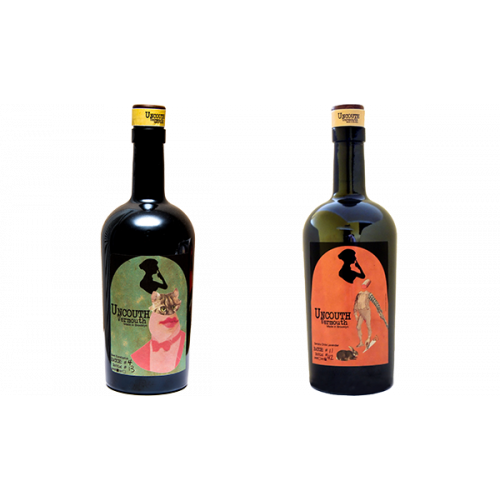 "It's truly a magical potion," says Bianca Miraglia, the founder of Uncouth Vermouth. "It starts out as wine and then it gets resurrected as an erotic aperitif." Vermouth was first produced in Italy centuries ago by fortifying wine with brandy, and flavoring it with various herbs and botanicals, particularly wormwood. At the time, vermouth was prescribed as a cure to several ailments — Hippocrates is said to have prescribed it to relieve anemia and menstrual cramps. In the late 19th century, however, bartenders began using vermouth as a standalone spirit, or as an ingredient in some of the first cocktails ever created.

Despite its waning popularity in the United States, Miraglia fell in love with the flavors and textures of vermouth while working as a bartender and sommelier. In 2012, she rented a space in Red Hook Winery and gave birth to Uncouth Vermouth (the label bears the silhouette of a woman uncouthly picking her nose).

Uncouth Vermouth Beet Eucalyptus is made using a Chardonnay that is infused with 16 different plants, including fresh beets. Uncouth Vermouth Serrano Chile Lavender is made using a Riesling from the Finger Lakes region of New York, and is infused with serrano pepper and lavender. While Miraglia refuses to release the exact recipe of either vermouth (she refers to the recipes as "sacred"), she admits that both vermouths are made using mugwort, a cousin of wormwood, and fortified with a grape-based brandy produced from the wine waste of the Red Hook Winery, where she rents space.

In addition, the herbs and botanicals used to make the vermouths are all purchased from local farmers or harvested by Miraglia herself. "Your closest source isn't always your best source,"she says of the ingredients, "but if you're willing to do your homework you can create a delicious vermouth without a drop of sugar, and without using any additives or preservatives."

Uncouth Vermouth Beet Eucalyptus has a bold, red color and a slightly earthy aroma. The hints of fresh beets are complimented by a slightly tangy, salty flavor profile. Uncouth Vermouth Serrano Chile Lavender has an aroma of lavender, and notes of sweet red pepper, citrusy herbs that lead to a finish that carries a spicy kick.