Be the first to review this product
It was in 1786 that Antonio Benedetto Carpano created the very first sweet vermouth. The Antica Formula uses his secret recipe that takes months to craft a bottle of this historic drink that uses Italian white wine and numerous herbs and spices.
$44.99
Add to Wish List

There's a rich history behind Carpano. It was in Turin, Italy in 1786 that Antonio Benedetto Carpano invented the formula that would give rise to vermouth. After studying to become a herbalist, he created the drink by combining Muscatel wine with herbs and spices. After sending a crate to King Vittorio Amedeo III, his creation received royal approval, which would eventually lead to Carpano's wine shop becoming a smash hit.

By the end of the 19th century the 3rd generation of Carpanos found their small-scale operation inadequate and decided to set up a factory. While the company was acquired by Silvio Turati in 1393, the industrialist opted to keep the production methods and the famous drink remained unchanged, while the company kept expanding. It was in 2001 that Branca Company acquired Carpano, staying true to traditions while at the same time continuing to innovate.

Today the Carpano Vermouth Antica Formula is produced by the Fratelly Branca Distillerie which has kept the original recipe. Select Italian white wines are used in production, along with several aromatic plants that have their aromas and flavors extracted using hot infusion and cold extraction ― a precise process that can take months. Vanilla from Madagascar, Papua New Guinea, and Tahiti are used along with Iranian saffron and wormwood from the Alps, while burnt sugar binds the flavors together.

Grab a bottle of this historic vermouth today! 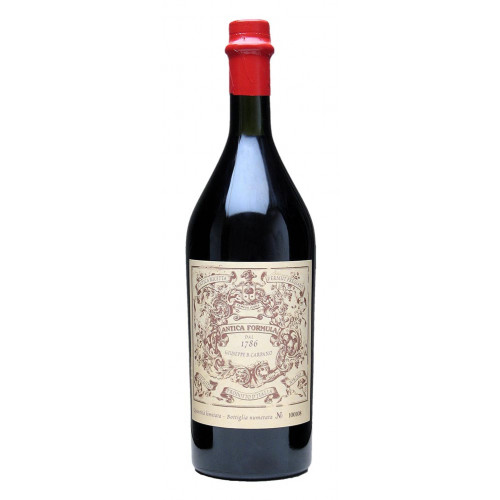