Size750mL Proof92 (46% ABV)
Umiki is an award-winning blended whisky made of oceanside distilled Japanese malt whiskies and imported grain whiskies, finished in Japanese pine barrels and brought to proof with pure desalinated ocean water.
Notify me when this product is back in stock. 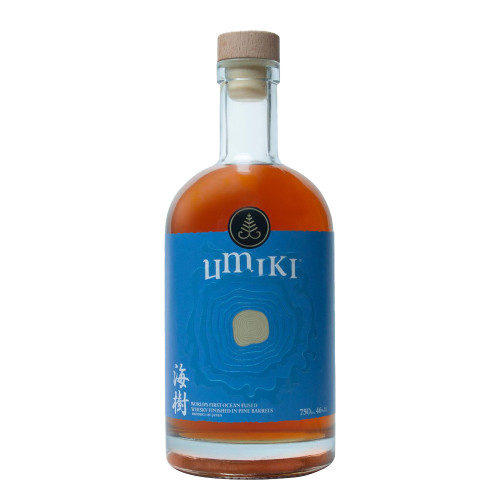 Over the past decade, global consumers have come to appreciate the qualities of Japanese whisky, resulting in a boom that often leaves the producers struggling to meet the demand. However, the story of Japanese whisky started more than a century ago, in 1918, when Shinjiro Torii, the founder of the company now known as Suntory, sent young Masataka Taketsuru to Scotland, where he studied chemistry and learnt about malt whisky brewing. Five years later Taketsuru and Torii set up Yamazaki, the country’s first malt whisky distillery. The two men had different visions and eventually parted ways, and in 1934, Taketsuru established his own whisky distillery in Hokkaido, which evolved into Nikka Whisky, the second largest whisky producer in Japan today. The rivalry between Suntory and Nikka and domestic demand propelled the development of the Japanese whisky industry for decades, however by the 1990s whisky’s popularity in Japan started to wane and it wasn’t until the 2000s that the sales started picking up again, driven by growing international interest.

In less than a decade, several new whisky distilleries have opened across Japan, and while early Japanese whisky makers tried to recreate the style of Scotch whisky, new generation producers are much more inclined to experimentation and innovation. Umiki, which is made with water from the Pacific Ocean and is the first whisky to be matured in pine barrels, definitely falls into the category of innovative and uniquely Japanese whiskies.

Umiki is a blended whisky made of oceanside distilled Japanese malt whiskies and imported grain whiskies. The whisky is finished in Japanese pine barrels and brought to proof with pure desalinated ocean water. The name Umiki is composed of the Japanese word for ocean, ‘umi’, and ‘ki’, which translates as tree in Japanese. Ocean is known as the source of life and placed in the heart of Japanese culture, while the pine tree with its long life is the symbol of life where gods are believed to reside and the symbol of eternity.

Umiki is an exceptionally smooth whisky with sea-breeze on the light and sweet nose, followed by a rounded and floral palate. The finish is soothingly fresh.