Size750mL Proof114 (57% ABV)
This rum from the Caribbean is based on a blend of Jamaican and Barbados rum, as well as rum from Guyana and Trinidad and is perfect as a sipper or rum-forward cocktail base.
Notify me when this product is back in stock. 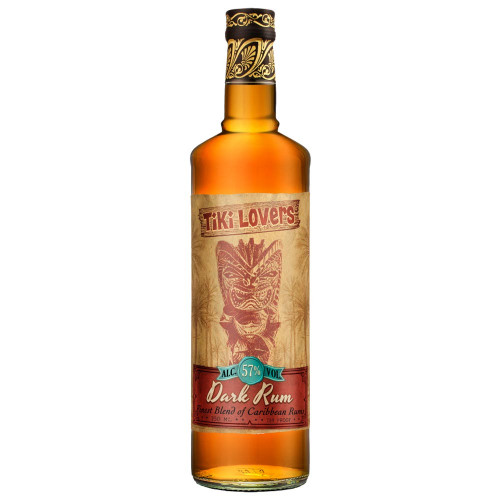 Tiki Lovers Dark Rum consists of a blend of aged as well as unaged rum from the Caribbean. The groundwork is laid on unaged Jamaican pot-still rum, hailing from Jamaica's Hampden Estate — the only distillery on the island that produces exclusively pot-still rum. It is expertly blended with Barbados rum that has been aged for 2 to 3 years. It is then enriched with clear column-still rums from Trinidad and Guyana, as well as some 3 to 5 YO rum from Trinidad, resulting in a spirit that is as complex as it is balanced. You can expect a rich palate with vanilla, fruit, spice, and dark sugar. Enjoy this 114-proof rum on its own or in a spectacular variety of rum-forward cocktails.

You can expect a rich palate, befitting it's pot-still backbone, with plenty of spice, vanilla, fruit, and dark sugar. Some notes of cloves, coffee, chocolate, and caramel are present.