Size750mL Proof104.6 (52.3% ABV)
Aged for 28 years, this limited edition whisky was bottled at cask strength without the use of chill filtration.
Notify me when this product is back in stock. 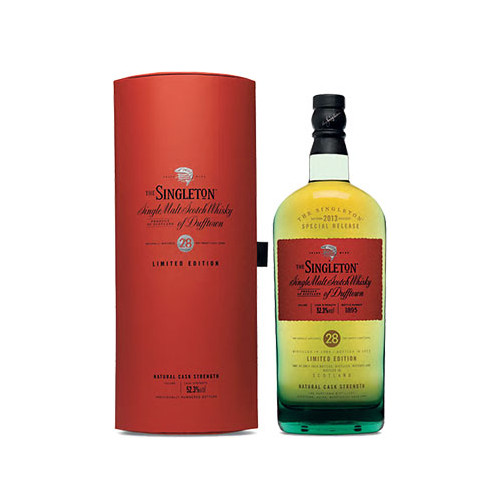 Situated in the Speyside region of Scotland, the Dufftown Distillery was founded in 1895 by four wine merchants who, together, purchased a stone built saw and meal mill and converted into a distillery. Located near the confluence of the Rivers Dullan and Fiddich, the distillery draws its water from Jock's Well, which is reknown for its incredibly pure and flavorful spring water (on more than one occasion, nearby distilleries — particularly Mortlach — have been caught attempting to divert water from the well to their own distillery).

Singleton of Dufftown Single Malt Scotch Whisky is crafted exclusively from malted barley, which is milled and mashed before being fermented in the distillery's wooden washbacks. Following fermentation, the whisky is distilled twice: first through a copper pot wash still and then again through a copper pot spirit still. The Singleton of Dufftown Single Malt Scotch Whisky was distilled in 1985 and matured for 28 years in refill American oak casks. After its nearly three-decade long beauty rest, the whisky was bottled at cask strength without the use of chill filtration.

Released as part of Diageo's 2013 Special Releases, Singleton of Dufftown 28 Year Old has an aroma of caramel apples, pine and honey that give way to notes of chewy milk chocolate, dried fruits and marzipan on the palate. The finish is bold and terrific, with a touch of menthol and oak.

Only 3,816 bottles of this whisky have ever been produced. Pick one up today!

Aroma of caramel apples, pine and honey that give way to notes of chewy milk chocolate, dried fruits and marzipan on the palate. Finish is bold and terrific, with a touch of menthol and oak.