Learn more
Size750mL Proof86 (43% ABV) *Please note that the ABV of this bottle may vary
The Macallan Triple Cask Matured 18 is a marriage of eighteen year old single malt aged in American sherry-seasoned casks, European sherry-seasoned butts, and American ex-bourbon barrels. The extra time in the barrels brings an exquisite flavor profile and velvety texture.
Notify me when this product is back in stock. 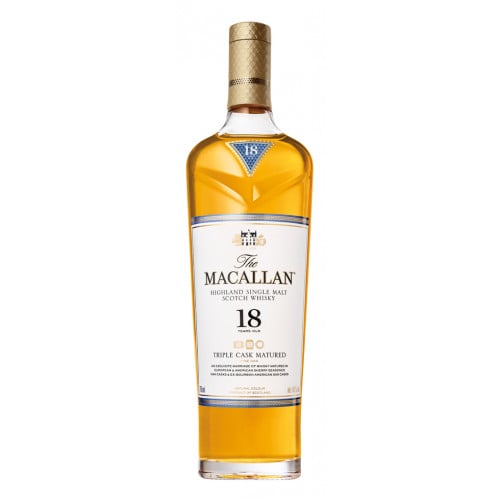 The Macallan 18 Year Old Triple Cask Matured sits at the top of the line. An intriguing whisky, it's aged in a triple-cask combination of European and American sherry seasoned oak casks and American ex-bourbon oak casks. The eighteen years of aging not only develops an exquisite flavor profile, it also adds depth to the velvety character and mouthfeel over complex notes of soft vanilla, cocoa, orange citrus, and wood smoke.

Florals once again greet the nose along with wood smoke, citrus, and vanilla. The velvety and complex palate delights with notes of orange zest, soft vanilla, cocoa, and nutmeg yielding to a long, chocolatey finish.