Learn more
Size750mL Proof87.4 (43.7% ABV) *Please note that the ABV of this bottle may vary
The Macallan Masters of Photography: Magnum Edition is the seventh edition of this special release. The images are art, and so is the Macallan Magnum Edition. A marriage of eight exotic Macallan casks.
Notify me when this product is back in stock. 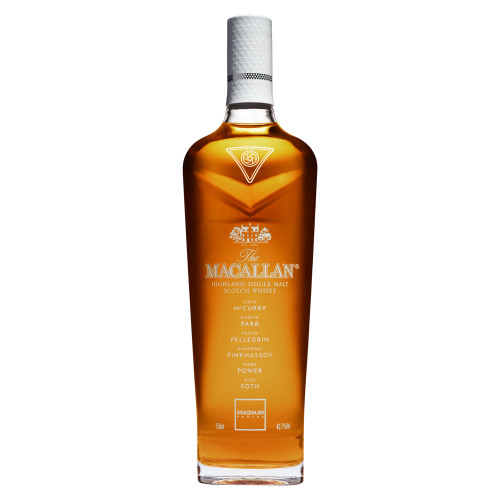 The Macallan Masters of Photography: Magnum Edition is the seventh limited edition release in the Masters of Photography series, celebrating the opening of the new Macallan distillery and visitor experience... For each release, Macallan partners with some of the greatest photographers working today. A special Macallan is created to accompany limited edition prints of photos taken by the celebrity artists in a handsome volume. This year’s release include images captured by six photo artists from the Magnum Photos cooperative of the new Macallan Distillery and visitor center, taken by world renowned Magnum photographers - Steve McCurry, Martin Parr, Paolo Pellegrin, Mark Power, Gueorgui Pinkhassov and Alec Soth.

But this is not "just" a pretty box with photos. The single malt in this edition is a combination of eight rare Macallan casks — including unique seasons casks, an ex-wine barrel, an ex-bourbon barrel, and some classic sherry casks of various ages and proofs. The result is smooth and complex inspiring a desire to savor slowly.

The aromas are delicate and filled with ginger, wood, fortunella, and caramel apple. On the tongue you’ll fine rich butterscotch, candied fruits, shortbread, and pecan with a medium finish.