Learn more
Size750mL Proof106.2 (53.1% ABV) *Please note that the ABV of this bottle may vary
This incredible whisky spent 62 years aging in sherry-seasoned American Oak casks before being bottled in a gorgeous Lalique crystal decanter.
Notify me when this product is back in stock. 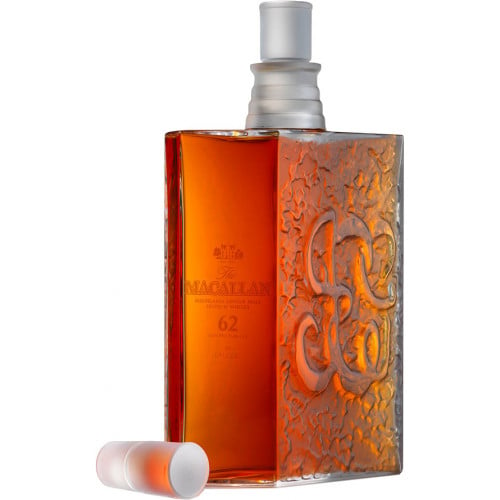 The Macallan Lalique 62 Year Old Single Malt Scotch Whisky: The Spiritual Home is the second-oldest whisky ever released by The Macallan. The whisky was laid to rest in sherry-seasoned American Oak casks in November, 1950, and bottled 62 years later in gorgeous Lalique crystal decanters styled after the Easter Elchies House on the Macallan Estate.

As a result, the whisky has a natural bright amber color, along with an aroma of toffee, blood oranges, apple cinnamon and ginger root. Sweet, delicate notes of figs, vanilla and mocha chocolate dominate the palate, and are complemented by an underlying body of polished oak. The finish is long and embracing, with beautiful notes of clove, raisins and cigar leafs.

Only 400 bottles of this outstanding whisky will ever be produced. Pick up yours today!

Natural bright amber color, along with an aroma of toffee, blood oranges, apple cinnamon and ginger root. Sweet, delicate notes of figs, vanilla and mocha chocolate dominate the palate, and are complemented by an underlying body of polished oak. The finish is long and embracing, with beautiful notes of clove, raisins and cigar leafs.