Learn more
Size750mL Proof80 (40% ABV) *Please note that the ABV of this bottle may vary
This expression was created in honor of the brand's 150th anniversary from Tanduay's special reserve aged rums, the oldest being 15 years old. After receiving numerous awards it was added to their regular lineup.
Notify me when this product is back in stock. 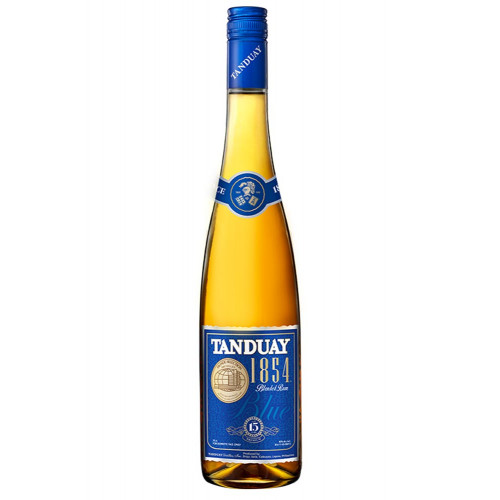 Since 1999 Tanduay Distillers, Inc. is owned by LT Group, Inc. In 2011, Tanduay was the 7th largest spirits brand in the world. Today their operation spans 4 plants that take care of aging, compounding, and bottling. At the heart of their lineup is an award-winning 5-year-old rum that matures in charred oak barrels. The brand has received over a hundred various awards over the years and sells over 20 million cases each year, making it the best-selling rum brand in the world.

Tanduay 1854 is crafted from Tanduay's special reserve aged rums, the oldest being 15-years-old. The 80-proof blended rum was created in honor of the company's 150th anniversary and garnered several awards soon after, which prompted Tanduay to add it to their regular lineup.

There's a fruity sweetness on the nose with fruit jam, some citrus, fresh hay, vanilla, spice, pepper, and mint notes. The palate has caramel, vanilla, citrus, oak, as well as a pleasant sweetness with tropical fruit notes. Finishes medium with caramel and fruit.