Learn more
Size750mL Proof86 (43% ABV) *Please note that the ABV of this bottle may vary
Made from fresh, raw California sugarcane, this rum earned a Good Food Award in 2013.
Notify me when this product is back in stock. 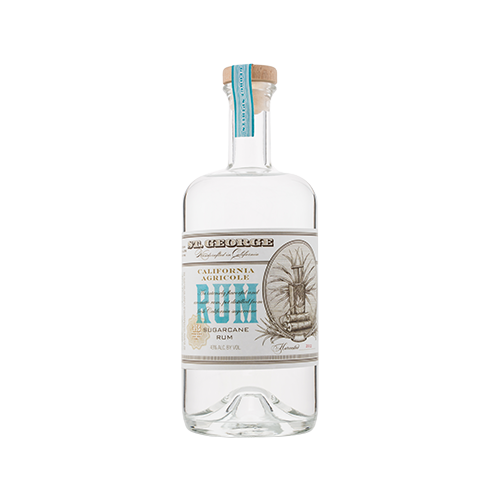 Founded in 1982 by German-born Jörg Rupf, St. George Spirits is one of the oldest craft distilleries in the United States. The distillery, which is housed in an old World War II airplane hangar on a former naval base on the edge of San Francisco, is home to Lance Winters, mad scientist and St. George's master distiller.

Winters, who is widely-known for experimenting with different types of spirits, has a laboratory dominated by a 10-liter test still, in addition to the glass beakers and graduated cylinders that cover every inch of counterspace. Next to the dusty chalkboards caked with equations for the conversion of sugar to alcohol and intricate diagrams of molecular structures are bottles of experimental whiskies, vodkas and even an aging balsamic vinegar (it's 14 years old already).

St. George California Agricole Rum is made from fresh, raw sugarcane grown in California's Imperial Valley. Situated almost entirely below sea level, the Imperial Valley suffers from a hot desert climate that consistently experiences temperature extremes (the temperatures in the valley are routinely over 100°, and the valley receives the most sunlight of any place in the United States). As a result, the sugar cane grown in the valley has incredibly rich, dense concentrations of sugar, which are ideal for distillation.

Once the California sugar cane has been harvested, it is transported immediately to St. George Spirits, where the stalks of sugar cane are pressed by hand through a sugarcane mill. Then, the uncooked cane juice is fermented using a unique strain of yeast that preserves the unadulterated, vegal properties of the juice. Following fermentation, the rum is distilled through a 500-gallon copper-pot still before being brought to proof and bottled by hand.

St. George California Agricole Rum has a vegal aroma with hints of truffles, black olives and fresh pine. The notes of fresh sugar are robust and pleasing, and are followed by a touch of black pepper. St. George Rum earned the Gold Medal at the Ministry of Rum Tasting Competition in 2011, and earned a Good Food Award in 2013.

Vegal aroma with hints of truffles, black olives and fresh pine. Notes of fresh sugar are robust and pleasing, and are followed by a touch of black pepper.