Caskers Rewards members earn up to 4 store points back when buying this bottle.
Size750mL Proof80 (40% ABV)
Inspired by blooming Japanese springs, this Japanese whisky blend is bright, refreshing and light with aromas of pear and flavors of juicy fruits, light honey and shortbread.
Notify me when this product is back in stock. 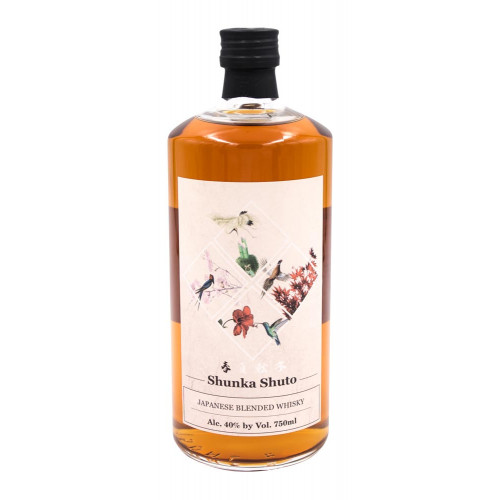 A brand-new venture, Shiki Distillery is located in the Hyogo Prefecture, just northwest of Osaka, Japan. Famous for its pristine nature, waters and mountains, the region is also the home of the best rice wine in Japan, Yamada Nishiki. Like many distilleries just starting out and preparing to distill their own spirits, Shiki Distillery began by curating and blending spirits from other producers – the best of Japan. Offering a collection of aged and unaged malt whiskies as well as blended whisky, the Four Seasons expressions are their first releases. The word "Shiki" means "four seasons" in Japanese and the four whiskies are intended to reflect the character of four seasons in Japan.

Shunka Shuto Spring Japanese Blended Whisky is a blend of Japanese whiskies that are married and aged in American white oak. Inspired by the fresh and breezy energy of spring, the time of "Hanami", or cherry blossom viewings, this edition offers a light and floral nose with aromas of pear and a refreshing palate with notes of juicy fruits, light honey and shortbread. Bottled at 80 proof, this is a superb Japanese blended whisky.

Medium amber hue. A light and bright nose with pear notes and orchard florals. The palate is sweet with vanilla, shortbread and hints of hibiscus. The finish is medium and smooth.