Be the first to review this product
Sagamore Spirit Rye Whiskey is mixed with Meyer lemon juice, green tea, and natural yuzu flavor for a super-refreshing carbonated drink. It was developed in partnership with the Baltimore-based mixer company CAnE Collective.
Add to Wish List
Notify me when this product is back in stock.

Recently, Sagamore Spirits has added a new way to enjoy their 4-year-old rye whiskey in the form of 3 canned cocktails: the Honey Paloma, Lemon Tea Fizz, and Black-Eyed Rye. The convenient ready-to-drink cocktails come in 355ml cans and are gluten-free. These were developed in partnership with the Baltimore-based mixer company CAnE Collective. The Lemon Tea Fizz is a 16-proof drink that is crafted with Sagamore Spirit Rye Whiskey, Meyer lemon (a hybrid citrus fruit from China) juice, green tea, and natural yuzu flavor. Its super-citrusy profile makes for an extremely refreshing carbonated drink that is perfect for summer.

You can expect aromas of citrus and green tea on the nose with the rye whiskey making itself known quickly. The palate is refreshingly citrusy and zesty with a super-fresh finish. 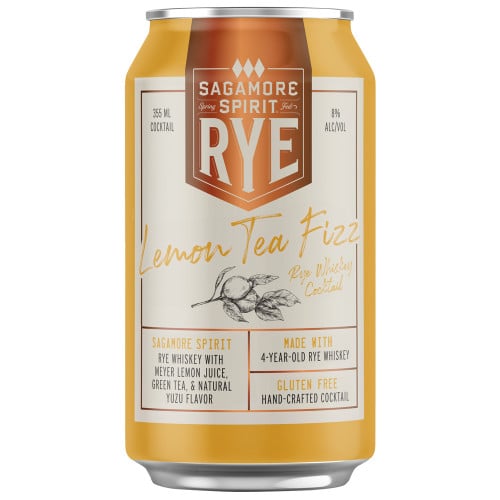