Caskers Rewards members earn up to 4 store points back when buying this bottle.
Size750mL Proof94 (47% ABV)
Micro-distilled in small batches, each of these gins earned a rating of "Exceptional"from the Beverage Testing Institute.
Notify me when this product is back in stock. 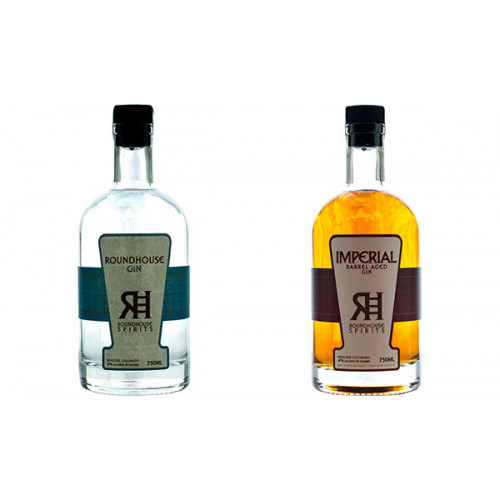 "I decided to start making gin not only because it's one of my favorites," says Roundhouse Spirits' founder Alex Nelson, "but also because gins have tremendously complex flavors and still manage to be extremely versatile."Situated in the foothills of the Rocky Mountains at an elevation of over 5,000 feet, Roundhouse Spirits was founded in 2008 with one simple goal: to become the Front Range Mountains' premier micro-distillery. "Most gin contains spices and herbs from around the world, so it's a truly modern spirit for a global age," says Nelson. "Still, the juniper berries we use in our gin grow right here in Colorado in the open space and mountain parks, so you can say that the gin we make literally has roots right here."

Roundhouse Gin is a New Western style gin made using a secret recipe of eleven different herbs and botanicals. After its initial distillation, the gin is distilled a second time through an antique, Spanish copper-pot still. During this second distillation, the gin is infused with organic juniper, coriander, citrus peel, star anise, angelica, and orris root. Following distillation, Nelson steeps the gin in a proprietary blend of sencha green tea, lavender, hibiscus and chamomile blossoms. This unique step in the production process adds a floral aroma to the gin, and compliments its notes of juniper with hints of green tea, citrus and chamomile that lead to a smooth and sweet finish.

Gluten-free, Roundhouse Gin earned the Double Gold Medal at the Denver International Spirits Competition in 2013, and earned a score of 93 points and a rating of "Exceptional"from the Beverage Testing Institute.

Roundhouse Imperial Barrel Aged Gin is made by aging Roundhouse Gin in new, American oak barrels for a minimum of ten months. As a result, Imperial Gin has notes of caramel, cinnamon and peppery spices, with a subtle undertone of citrus and vanilla.

Roundhouse Imperial Barrel Aged Gin earned the Gold Medal at The Fifty Best Tasting Competition in 2013, and earned a score of 94 points from the Beverage Testing Institute.

Roundhouse Gin: Floral aroma with initial notes of juniper and coriander. Hints of green tea and citrus that lead to notes of chamomile and sweet hibiscus on the finish. Imperial Gin: Notes of caramel, cinnamon and pepper with a subtle undertone of citrus and vanilla.