$84.99
Caskers Rewards members earn up to 4 store points back when buying this bottle.

Size750mL Proof86 (43% ABV)
This is an excellent example of aged gin, made from sugar cane instead of a neutral grain spirit. It's distilled five times and aged for 35 weeks in ex-Rum barrels.
Notify me when this product is back in stock. 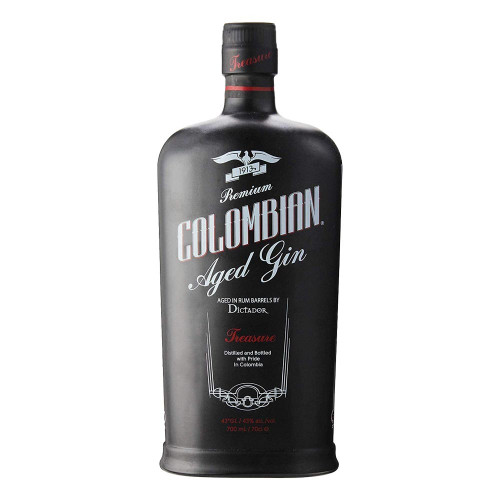 In 1751, Severo Arango y Ferro arrived in Cartagena, a port city in northern Colombia. Ferro had been sent to Colombia from Spain and was asked to establish and oversee commercial trading activities between Spain and its American colonies. Ferro proved himself to be an able and ruthless statesman and under his leadership, the city of Cartagena became a hub of economic activity and the most important port for the Spanish fleet in the Americas. Ferro's strength and power also earned him the nickname "Dictador."

Dictador Treasure Colombian Aged Gin is made from sugar cane unlike most gins that are based on a neutral grain spirit. It's distilled five times and aged for 35 weeks in ex-Rum barrels, resulting in a light amber color and smoked toffee notes on the palate. The complete list of botanicals is a secret, but we do know it includes juniper, citrus zest, and their signature ingredient – limon mandarino, a hybrid of mandarin orange and lemon with green skin and orange flesh. Bottled at 86 proof, this is a truly unique gin.

The nose is warm, greeting with flamed orange peel and subtle mint. The palate brings subtle oaky and smoky flavors of toffee balanced by cracked pepper and citrus.The finish is smooth with salted caramel and fresh lemon.