Caskers Rewards members earn up to 4 store points back when buying this bottle.
Size750mL Proof80 (40% ABV)
Cacique 500 earned a gold medal at the 2018 San Francisco World Spirits Competition.
Notify me when this product is back in stock. 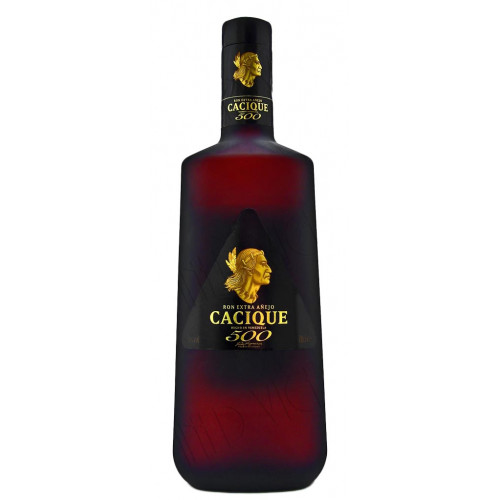 Cacique is a Spanish version of a word that comes from out of the ancient Caribbean Taino language, which translates to “Chief of the tribe.” Cacique is the leader of Venezuelan Rums.

Produced by Destilerias Unidos (who produce Pampero and Diplomatico Rums), Cacique was launched in 1959 an is now considered to be one of the best premium dark Rums of the region. Their lineup includes a range of Rums, including a Gold, Añejo, 500 Extra Añejo, and Antiguo.

Cacique 500 was launched in 1992 in commemoration of the 500th anniversary of the voyage of Columbus in 1492. This premium rum is distilled through copper stills and aged at least two years. This tequila is an “Extra Añejo,” meaning that it is aged for up to eight years in American white oak barrels. This incredible spirit earned a gold medal at the 2018 San Francisco World Spirits Competition.

Complex aromas of toffee and sweet vanilla on the nose, the palate is robust and full-bodied with a smooth finish.