Learn more
Size750mL Proof118 (59% ABV) - May vary *Please note that the ABV of this bottle may vary
Crafted with whole grains of rye and barley malt, this rye is aged in American white oak casks. Each barrel of this smooth and flavorful spirit is unique, so there are slight variations in its flavor profile as well as proof ― it ranges from 118 to 130.
Notify me when this product is back in stock. 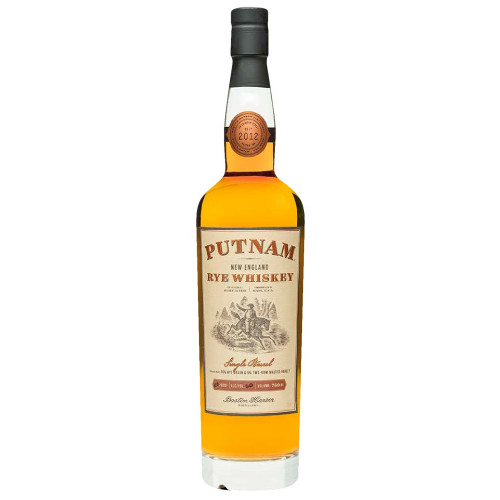 They love to take their inspiration from local history at the Boston Harbor Distillery. Silas Putnam was the one who built the distillery's location. The inventor of the machine-made horseshoe nail proceeded to supply his invention to both sides during the Civil War. The distillery's Putnam lineup of whiskey pays tribute to his entrepreneurial spirit. The Single Barrel New England Cask Strength Rye is crafted with whole grains of rye and barley malt. Finished with Quabbin Reservoir water, it is aged in American white oak casks, before being bottled at 118-130 proof. As each barrel is unique, the proof and flavor profile can vary.

It's spicy and sweet rye with black pepper, oak, and fruit on the nose. There's fruit, vanilla, and spice on the palate. The finish is warming & spicy. Each barrel is unique, so your mileage may vary!