Size750mL ProofVodka and Honey Vanilla: 80 (40% ABV); Stone Fruit: 70 (35% ABV)
Distilled exclusively from Ohio soft red winter wheat, each of these vodkas is all natural and certified kosher.
Notify me when this product is back in stock. 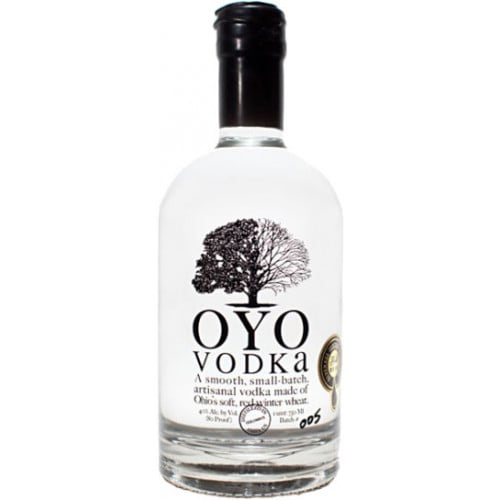 "Part of the reason I started a distillery has to do with my family lineage," says Ryan Lang, the master distiller at Middle West Spirits. "There's four generations of distillers blood in my veins, although I might be the first generation to do this legally". Situated in a 10,000 square-foot warehouse in the heart of the Ohio River Valley, Middle West Spirits was founded in 2008 by Lang, together with his business partner, Brady Konya. Together, the pair marry modern distillation techniques with traditional craftsmanship — and it's working.

Each OYO Vodka is made exclusively from Ohio soft red winter wheat. "To get this whole process started," says Lang, "we started pulling grains from all over the state. We wanted to find something that best reflected the Ohio River Valley's unique terrior."After a tireless search, Lang and Konya identified a wheat varietal growing in northeastern Ohio that enjoyed a nutrient rich, clay soil. "The soil draws water from the wheat, and what's left in the wheat is a flavor that's more caramel in taste than wheat from other regions," says Lang. "That's the flavor we wanted for our brand's footprint."

Once the soft, red winter wheat is harvested, it is transported back to Middle West Spirits, where Lang mills and mashes the grains before fermenting them in an open-top fermentation tank (Breckenridge Distillery uses a similar tank to produce Breckenridge Bourbon). Following fermentation, the wash is distilled an astounding 34 times through a column still.

OYO Vodka has sublime notes of citrus, creamy vanilla and caramel, which complement touches of minerals and figs. The vodka earned the Gold Medal at the Beverage Testing Institute Competition in 2012, where it earned a score of 91 points.

After each vodka has been distilled, Lang filters the vodka for sediments. "We don't do the type of carbon filtration most of the commercial brands use," says Lang, "because our ingredients and still allow us to preserve the flavors of the wheat and fruits." Following filtration, each batch of vodka is brought to proof and bottled by hand.

Pick up this unique vodka today!

Vodka: Notes of citrus, creamy vanilla and caramel, which complement touches of minerals and figs.