Size1000mL Proof80 (40% ABV)
Ketel One Vodka is a fresh, crisp vodka that was inspired by the US vodka cocktail culture. It is made with carefully selected European winter wheat using a combination of modern column still and traditional copper pot still distillation. 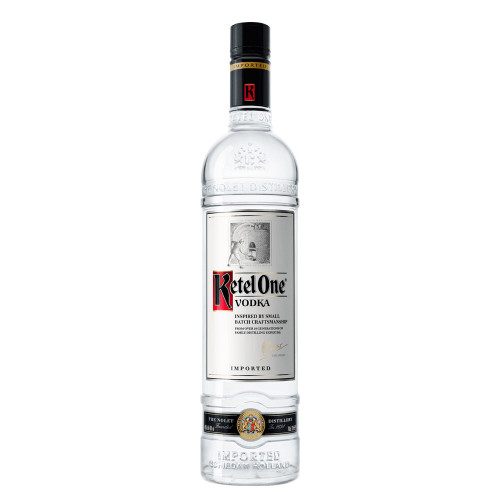 About Ketel One Vodka (1L)

"Nolet Distillery was founded by Joanness Nolet, who, looking for the perfect location for a distillery, settled in Schiedam, Holland, in 1691. Schiedam became the capital of spirits in the 18th and 19th centuries, known for its genever or gin, and by then, the Nolet family had already greatly expanded its distilling business. With their spirits firmly established as one of the finest in the region, the Nolets started exporting across the Atlantic in 1867, and in the early 20th century opened its second distillery in Baltimore, Maryland, which was however forced to shut down due to the prohibition less than two decades into its operation. Holland’s spirits industry was one of the many casualties of the Second World War, and the Nolet Distillery is one of the few that reopened and survived to this day.

The company entered a new, modern era in 1979, when Carolus Nolet took over its reins. After reading about the Nolets’ first foray into the US, Carolus decided to finish the journey his grandfather started, and went on an immersive research of the US vodka cocktail culture. Realizing that the vodka was imparting a similar, sharp style to all cocktails, Carolus returned to Schiedam determined to create a vodka that tastes great neat or on ice and is perfect for cocktails. After years of experimentation, he discovered the perfect vodka recipe using a combination of modern column distillation and the unique liquid produced by copper pot stills. He named the new product after the distillery’s oldest, coal-fired copper pot still – Distilleerketel #1, which is fully operational to this day and pictured on every Ketel One Vodka bottle. In 2002 Ketel One Vodka reached the milestone of selling one million cases in a year despite never advertising. In its first advertising campaign in 2003, the brand thanked its drinkers for helping it build its reputation.

Ketel One Vodka is made with carefully selected European 100% GMO-free winter wheat using a combination of modern and traditional distilling techniques. While most vodkas are distilled in column stills, Nolet Distillery also uses its copper stills in the process, creating the characteristic silky soft, pure flavor of their flagship vodka. When the vodka is distilled, filtered and masterfully blended, a Nolet must taste and approve every batch before bottling to guarantee Ketel One Vodka’s signature crisp quality.

This vodka is fresh on the nose, with hints of citrus and honey. The palate has a crisp, lively tingle, with signature silky softness on the tongue. The finish is long and subtle.