This product is available in: CA, FL, NH, NJ, ND Unfortunately, we can't ship to PO Boxes and APO addresses.

Size750mL Proof70 (35% ABV)
Malibu Black is a stronger and bolder version of Malibu’s classic Caribbean coconut rum, bottled at 70 proof. It is based on a dark rum that has been aged longer than light rums, which gives it a more pronounced and richer flavor.

This product is available in: CA, FL, NH, NJ, ND Unfortunately, we can't ship to PO Boxes and APO addresses. 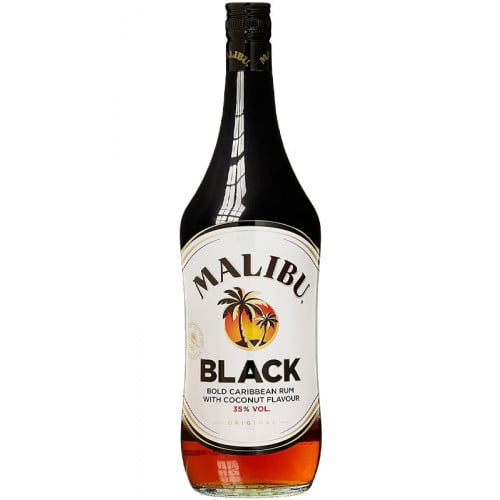 Malibu Black is a stronger and bolder version of Malibu’s classic Caribbean coconut rum, bottled at 70 proof. It is based on a dark rum that has been aged longer than light rums, which gives it a more pronounced and richer flavor. With a higher proof and less sweetness than a traditional flavored rum, Malibu Black brings the flavor of the Caribbean to any cocktail.

The nose is sweet, with aromas of fresh coconuts. On the palate, Malibu’s signature coconut notes are accompanied by tropical flavors of caramel, vanilla, and cinnamon. The finish is satisfying and not overly sweet.