Caskers Rewards members earn up to 4 store points back when buying this bottle.
Size750mL Proof86 (43% ABV)
Makar Original is a perfectly-balanced juniper-led London Dry style gin from the The Glasgow Distillery Company. The gin is distilled seven times, and bottled at 43% ABV. This award-winning gin is bold and vibrant, and perfect for anyone looking for a gin with juniper at the fore.
Notify me when this product is back in stock. 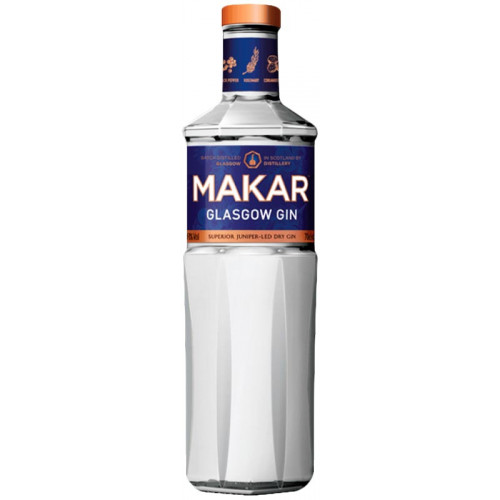 When The Glasgow Distillery Company opened in 2014, it became the first single malt whisky distillery in Glasgow for over 100 years. Named after one of Glasgow’s original distilleries, which was founded at Dundashill in 1770 and closed at the beginning of the 20th century, The Glasgow Distillery Company embraces the pioneering spirit of Scotland’s first licensed distillers. The founders, Liam Hughes, Mike Hayward and Ian McDougall, are on a mission to bring single malt distilling back to the city, and hope that their venture marks the start of a whole new age of distilling in Glasgow. Committed to authenticity and quality, the distillery’s innovative and skilled team uses the finest ingredients, the best distilling equipment, and best casks from around the world to make a wide portfolio of handcrafted premium spirits. Their whisky, gin, rum and vodka are distilled in five copper pot stills, Annie, Mhairi, Tara, Margaret and Frances. Attention to detail and the superb craft that go into their products have already earned the company a number of awards from international spirits competitions.

The Glasgow Distillery Company’s Makar is a juniper-led, handcrafted small-batch Scottish gin of the highest quality. Its name is an old Scottish word for a poet, and the team making the first gin ever to be distilled in Glasgow is as attentive to the process as if it were writing elegant verses. The Glasgow Distillery Company distills its gin seven times in its copper pot still Annie, which was named after one of the founder’s great grandmother. Seven is also the number of botanicals that support the finest juniper berries in each of their gins.

Makar Original is a perfectly-balanced juniper-led London Dry style gin. Juniper berries are supported by fresh lemon, fresh rosemary, black pepper, coriander seeds, licorice, cassia bark and angelica root in this expression. Bottled at 43% ABV, Makar Original is bold and vibrant, and perfect for anyone looking for a gin with juniper at the fore.

The nose is invigorating with fresh pine and eucalyptus, and floral and herbal rosemary notes with touches of zesty lemon citrus. The robust juniper is supported by citrus and savory notes on the palate, with black pepper spice and hints of licorice contributing to a fully rounded and balanced mouthfeel. The finish is long, smooth and dry, with notes of angelica and lingering warm pepper spice and rosemary.