Size750mL Proof80 (40% ABV)
A 100% Borderies expression, this cognac is comprised of three select casks from Galtaud. Rated the #14 Personal All-Time Favorite Brandy of F. Paul Pacult, Editor of F. Paul Pacult's Spirit Journal: June 2016.
Notify me when this product is back in stock. 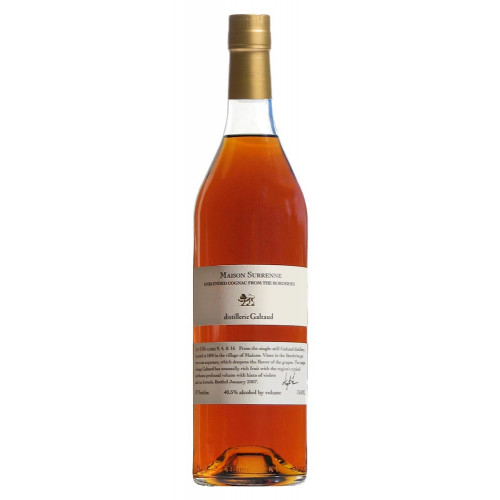 Over three decades ago, Ansley Coale picked up a hitchhiker along Route 101 just north of San Francisco. The hitchhiker — Hubert Germain-Robin — was of French origin and came from a family that had been producing cognac since 1782. As the two drove northward in Coale's car, Hubert spoke of his family's background in distillation. "Hubert wanted to distill using craft methods handed down for centuries from master to apprentice," recalls Coale, who eventually teamed up with the hitchhiker to found Craft Distillers in 2003. After purchasing an antique cognac still from an abandoned distillery, Hubert and Coale built a redwood shed in northern California and began distilling spirits.

"Surrenne’s eight aging cellars hold extensive stocks of aged distillates that have been maintained pure and unblended. There are four distilleries, including the ancient installation in the chateau of Triac. The home distillery is on the Quai de l’Ile Madame on the banks of the Charente river in Jarnac. Great cognac reflects the land and climate from which its grapes were taken. The bottlings come from specific regions, and we further emphasize their individuality by using cognacs from a particular vintage, or a single distillery, or even an individual cask. Many of these bottlings are unblended, and the rarities are unfiltered." (Craft Distillers).

Maison Surrenne Galtaud is an exceptional cognac that is from the single-still Galtaud distillery, founded in 1800 in the village of Mainxe. A 100% Borderies expression, this cognac is comprised of three select casks from Galtaud, a single still distillery in the village of Mainxe that has been in operation since the beginning of the 19th century. Aged 14 years, this distinctive full-bodied cognac is the essence of the unique terroir that is the Borderies, with its rich, fruit forward palate complemented by hints of violets and nut kernels. Rated the #14 Personal All-Time Favorite Brandy of F. Paul Pacult, Editor of F. Paul Pacult's Spirit Journal: June 2016.