This product is available in: CT, DC, FL, NJ, WA Unfortunately, we can't ship to PO Boxes and APO addresses.

Size750mL Proof24 (12% ABV)
This iconic Champagne was crafted in 1876 for Alexander II, tsar of Russia. Widely recognized as the very first Cuvée de Prestige, Louis Roederer's flagship wine is made with around 40% Chardonnay and 60% Pinot Noir. 2013 was a favorable year with plenty of sunshine and low rainfall.

This product is available in: CT, DC, FL, NJ, WA Unfortunately, we can't ship to PO Boxes and APO addresses. 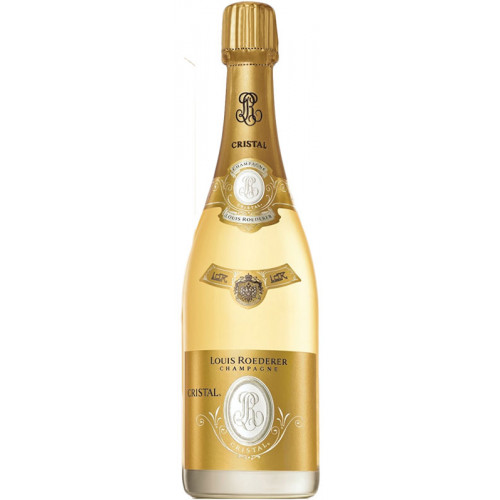 Louis Roederer is the largest independent, family-owned Champagne house in the world with its roots dating back to 1776. Louis Roederer inherited the house in 1833, channeling his entrepreneurial spirit into every aspect of the business and each stage of the production of the Champagne. While most producers were sourcing the grapes, he bought several grand cru vineyards, carefully studying the land and its characteristics.

The progress continued under the leadership of Louis Roederer II, who continued down the path laid by his father. He started exporting the Champagne to the United States and Russia, eventually crafting an exclusive Champagne for the tsar. The very first Cuvée de Prestige was created for Alexander II, tsar of Russia in 1876 and named Cristal. It wasn't until 1945 that Cristal became commercially available. The subtle and elegant wine would become Louis Roederer's flagship cuvée.

Cristal consists of around 40% Chardonnay and 60% Pinot Noir. It's aged for 6 years in the Louis Roederer cellars, and another 8 months after dégorgement. Powerful yet delicate and beautifully sophisticated, Cristal is known for its balance, silky texture, white fruit, and citrus notes. The iconic transparent lead-crystal bottle with a flat bottom originates from the turbulent times when the tsar feared assassination and had the special bottles made so that explosives couldn't be hidden within. There was a long winter and cool spring in 2013 with late flowering. Luckily, the summer had plenty of sunshine, high temperatures, and little rain ― the perfect conditions for both varietals.

Get your bottle of this iconic Champagne today!

The Champagne is a golden hue with fine and steady bubbles. The nose is sweet with distinct chalky aromas. You'll find plum, nectarine, citrus zest, and hazelnut on the complex and intense palate with a balance of freshness, sweetness, and chalky notes, along with tannins. The finish is briny.