Size750mL Proof62 (31% ABV)
Crafted in collaboration with Kansas City-based coffee roasters Thou Mayest, this liqueur is made with corn spirit, several botanicals, single-origin coffee, and cane syrup. It spends some time in ex-bourbon casks, resulting in a rich bittersweet liqueur that's perfect as a digestif or cocktail ingredient.
Notify me when this product is back in stock. 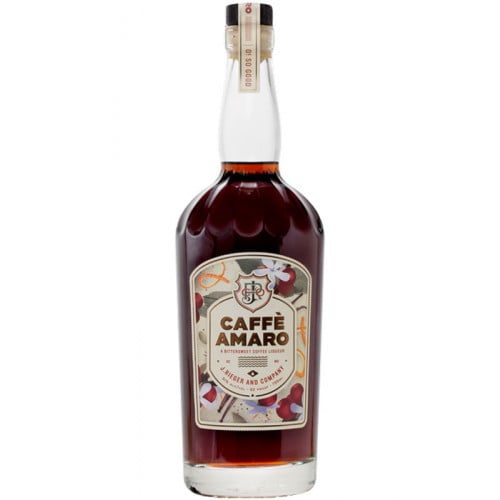 J. Rieger & Co. Caffè Amaro is more than just an "amaro" (bitter) liqueur. Amari are typically bitter and herbal with a touch of sweetness. This expression, however, was crafted in collaboration with Kansas City-based coffee roasters Thou Mayest. Throughout the production process, the expression is transferred from different barrels and tanks no less than 10 times. Botanicals are first steeped in corn spirit, creating the base for the liqueur. Then, a batch of coffee is made from single-origin coffee and blended into the base, which then goes into ex-bourbon casks. Cane syrup is added before bottling, adding a touch of sweetness to the bitter botanical base. The rich and bittersweet liqueur is bottled at 62 proof and makes for a delicious cocktail ingredient or a digestif.

Get your bottle of this coffee-flavored amaro liqueur today!

Licorice, menthol, citrus, and coffee aromas lead the charge on the nose. The complex palate is minty as well with a touch of earthiness and pine notes. There's a rich balance of bittersweetness on the palate that lingers through the finish.