Size750mL Proof86 (43% ABV)
Coming from the distillery that pioneered South African craft gin, this expression embraces the region's unique terroir. Fynbos is the local South African shrubland vegetation that provides the unique botanicals for this floral and clean gin.
Notify me when this product is back in stock. 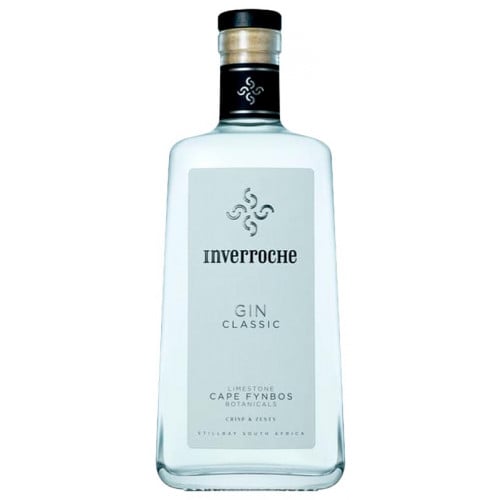 Founded by Lorna Scott and her family, the Inverroche Distillery was a pioneer of the South African craft gin movement. Scott and her son Rohan began experimenting on their kitchen table with a miniature 2-liter still nicknamed "Mini-Meg" in 2007, and after years of trial and error, the distillery has grown into a modern eco-friendly and sustainable operation. The name reflects the Scotts' Celtic and Gaelic backgrounds: "Inver" is Scottish for "a confluence of water" and "roche" is French for "stone". These two elements come together in the South African town of Still Bay, which lies on the Western Cape. Their lineup consists of 3 distinct gins that showcase the botanicals found in fynbos, local South African shrubland vegetation. The three expressions each pay tribute to their own set of fynbos botanicals: The limestone rock fynbos, coastal dune fynbos, and mountainous fynbos.

They fill their copper pot still with mineral-rich water that they pump by hand from the aquifer that lies directly beneath the distillery. The fire is fueled by invasive plant species that pose a threat to the indigenous fynbos. The fynbos is added during a proprietary process, where the botanicals are layered into steam baskets within the wood-fired 1,000-litre pot still named Magnanimous Meg. This process allows the steam to extract the aromatic oils during distillation. "And, in case it ever comes up as a Trivial Pursuit question, both stills are named after Meg Dodds, the irascible landlady in Sir Walter Scott’s famous novel St. Ronan’s Well," says Lorna Scott.

The Inverroche Gin Classic is infused with fynbos from the Cape Floral Kingdom, of the world's 6 UNESCO-protected floral kingdoms. The limestone-rich soil there shapes the lowland fynbos that results in dry and green juniper notes, as well as distinct floral and citrusy undertones. It's deliciously crisp on its own and shines in cocktails as well.

The nose opens with green and grassy juniper as well as distinct floral undertones. The palate is equally floral with rose petals and citrus. Finishes clean, dry, spicy, and smooth.