Size120mL Proof100 (50% ABV)
It's a single ingredient that is at the heart of this bitters ― Indian cassia bark, a spicier and smokier type of cinnamon. It's the perfect cocktail-companion to apple, pear, and pineapple juice, but goes just as well with a cup of coffee.
Notify me when this product is back in stock. 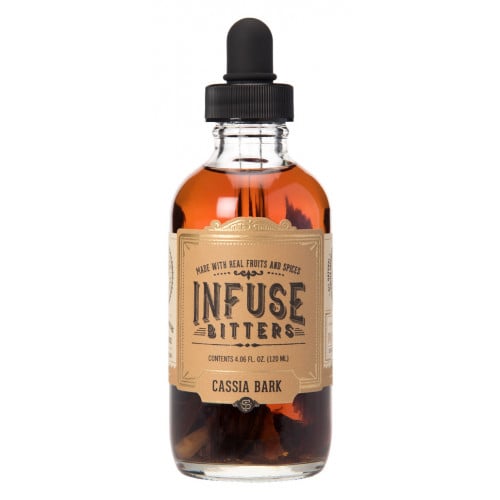 Infuse was born as a passion project in the garage of Seth Benhaim in 2012. Benhaim came into contact with infused spirits while vacationing and immediately recognized there was a market for a natural, simple, and straightforward product. After extensive sampling and tinkering with the recipes, Infuse Spirits was launched. When Benhaim entered his first vodka releases in the San Francisco Worlds Spirits Competition, his creations made him the youngest person ever to win both Best in Show and Double Gold at just 25 years.

Infuse Spirits has gone on to develop a wide range of products, including six vodkas and a lineup of unique cocktail bitters under the brand name Infuse Bitters. All the products are naturally flavored with real roots, spices, and fruits. Each bottle is single-infused by hand and the ingredients remain inside. No sugars, dyes, flavorings, or artificial additives of any kind are used. The non-potable (not meant to be drunk on their own) bitters are meant to be used as an additive in any number of cocktails and mixed drinks, but their range of application stretches to use in cooking and baking, as well as in coffee, tea, or water. Let your imagination fly!

Infuse Bitters Cassia Bark relies on its single ingredient ― raw Indian cassia bark, which is a type of cinnamon that is spicier and smokier than your regular cinnamon sticks. It pairs especially well with apple, pineapple, and pear juice, as well as citrus. Add it to a cup of coffee or get creative.

Get one for your cocktail cabinet now!

Raw Indian cassia bark is a spicier and smokier type of cinnamon. This single ingredient makes this bitters the perfect companion to apple, pear, or pineapple juice.