Size150mL Proof94 (47% ABV)
Coming from a small New York company, this classic bitters is made with neutral grain spirit, cinnamon, clove, Jamaican allspice, black peppercorns, caraway, wormwood, and gentian root. Its balanced and complex profile is the perfect match for dark rum and whiskey.
Notify me when this product is back in stock. 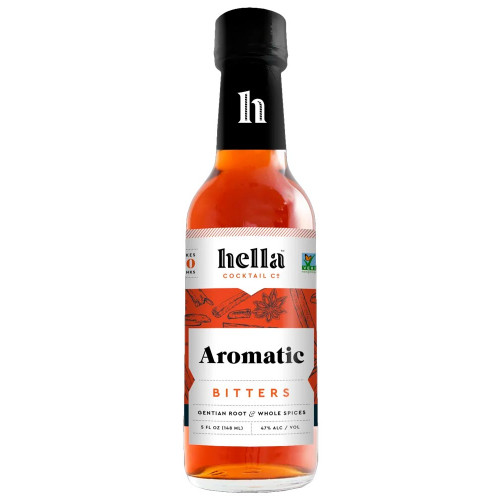 Apart from making small-batch bitters, the company focuses on mixology, producing mixers and kits that enable you to craft your own bitters and cocktails. Their range of bitters includes Aromatic, Orange, Smoked Chili, Citrus, Ginger, Apple Blossom, Eucalyptus, and Mexican Chocolate variations. They even have two canned Bitters & Soda drinks, the sugar-free Dry Aromatic and the bittersweet Spritz Aromatic.

Hella Aromatic Cocktail Bitters starts with a neutral grain spirit, to which all-natural spices like cinnamon, clove, Jamaican allspice, black peppercorns, caraway, wormwood, and gentian root are added. The mixture is then left for one month to macerate in tanks. The balanced bitters has a complex and classic profile that pairs wonderfully with dark rum and whiskey.

This bitters has aromas of cinnamon, cloves, and molasses. There's ginger root, caramel, and prominent cloves on the palate. The intense profile finishes bitter and goes perfectly with whiskey and dark rum cocktails.