Size750mL Proof80 (40% ABV) *Please note that the ABV of this bottle may vary
Highspire Pure Rye Whiskey finely displays both the the tradition of pre-Prohibition ryes as well as the innovative techniques being used to age whiskey today. This 100% rye whiskey, made from local Kentucky grains, is swiftly aged in California wine barrels.
Notify me when this product is back in stock. 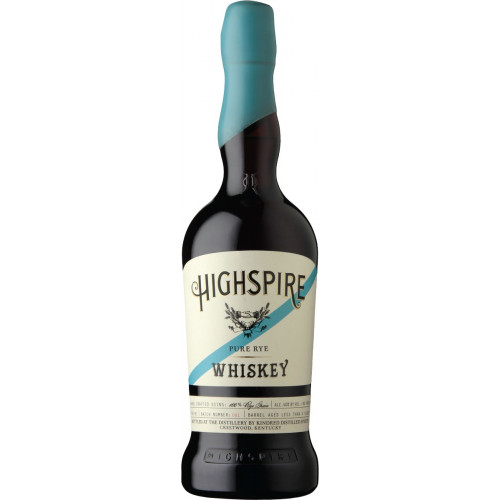 Skip to the beginning of the images gallery
Off 50 Percent

Highspire Pure Rye Whiskey is made from 100% specialty rye grains grown on the historic Waldeck Farm in Crestwood, Kentucky, which is only a few hundred yards from the distillery, Kindred Distilled Spirits. Once the grains have been milled, mashed and distilled, the resulting spirit is aged in California wine barrels, which balances the fresh, plump rye character with notes of fruit and spice from the wine, as well as vanilla, caramel and oak from the staves themselves.

Highspire Pure Rye Whiskey finely displays both the the tradition of pre-Prohibition ryes as well as the innovative techniques being used to age whiskey today.

Pick up a bottle or two today before they're gone!

Fresh, plump rye character balanced by fruit and spice from the California wine barrels. Notes of vanilla, caramel and oak and present throughout, resulting in an extremely mellow and well-balanced whiskey.