Learn more
Size750mL Proof72 (36% ABV) *Please note that the ABV of this bottle may vary
Barrel-aged for four months High West Barreled Boulevardier was crafted by the first distillery in Utah since Prohibition.
Notify me when this product is back in stock. 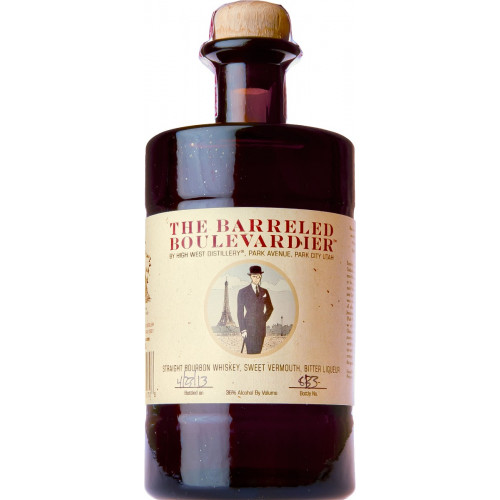 Situated at the bottom of the Quitting Time Ski Run in Park City, High West Distillery & Saloon is the first distillery in Utah since Prohibition and the only ski-in gastro-distillery in the world. "We wanted to call High West a "saloon", says David Perkins, High West's founder, "because we wanted to pay homage to the history of saloons in the old West and the important role they played in each and every town that had one. The saloon was the main meeting place where town hall was held, important announcements were made, and people went to eat and drink. We want people to share that sense of community and friendship over High West."

High West Distillery's The Barreled Boulevardier is named after the eponymous cocktail invented by Erskine Gwynne. During Prohibition, Gwynne moved to Paris and began writing a monthly publication called The Boulevardier, which catered toward expatriates and was patterned after The New Yorker. The magazine's contributors included literary notables such as Ernest Hemingway, Thomas Wolfe, and Sinclair Lewis, and included full-page cocktail recipes in the back. "Gwynne made his cocktail with one-part Campari, one-part Italian vermouth, and one-part bourbon," says Perkins. "Ours is a little more whiskey-forward."

High West's The Barreled Boulevardier is made from a marriage of six-year old bourbon, Vya Sweet Vermouth and Gran Classico, a bitter amaro from Switzerland. Once the ingredients have been blended together, they are aged in a barrel for approximately four months. "The barrel aging adds a rich mouth feel and mellows the ingredients," says Perkins. The Barreled Boulevardier has an herbal aroma, with notes of dried cherries, sweet fruits, cinnamon, oak and roasted nuts that lead to a mellow finish with a touch of bitters "The Boulevardier is a real delight served over ice with a twist of orange or lemon peel."

Herbal aroma, with notes of dried cherries, sweet fruits, cinnamon, oak and roasted nuts that lead to a mellow finish with a touch of bitters.