Size150mL Proof94 (47% ABV)
These bitters add depth to your cocktails such as the Margarita. They are rich with a spicy kick and smoke with a solid bitter base where the gentian serves as the bittering agent.
Notify me when this product is back in stock. 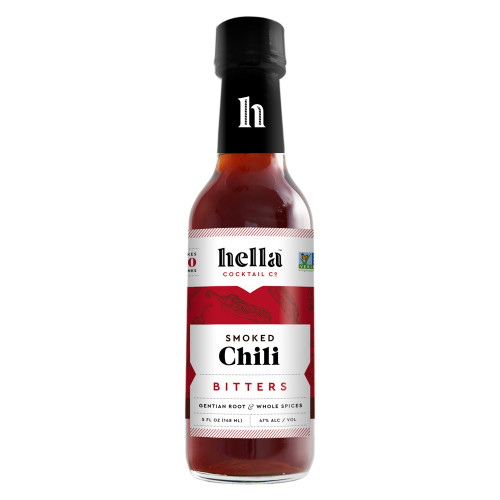 Their bitters are crafted with gentian, known as "The King of Bitters". The plant is indigenous to Europe and is known to aid digestion. Their proprietary bitters have spices such as anise, allspice, fruit peel, and various botanicals. Each 5 oz bottle contains enough liquid for 80 drinks. Hella Smoked Chili Cocktail Bitters were made with caramel, whole smoked chili, gentian, and spices. The resulting bitters are rich, spicy, and smoky, adding depth to cocktails and transforming your Margaritas.

Grab a bottle of these spicy & smoky bitters today!

These bitters are smoky and spicy with a richness that adds depth to your cocktails.