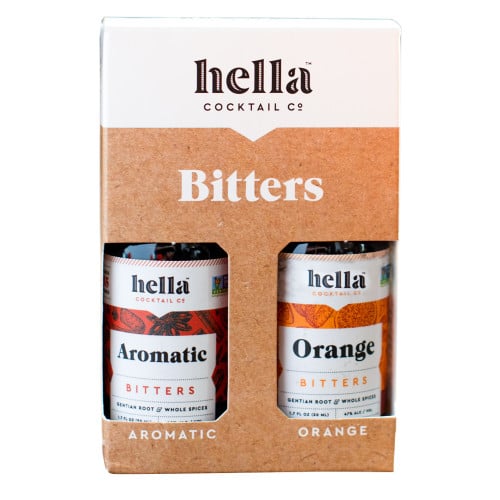 This 2-pack contains two travel-friendly 1.7 oz bottles: the Aromatic Bitters and Orange Bitters. Both are crafted with real ingredients, no extracts, artificial stuff, or coloring. Real orange skins and gentian root are used in the Orange's simple, high-quality recipe, along with an aromatic spice blend that creates complexity.

Hella Aromatic Cocktail Bitters starts with a neutral grain spirit, to which all-natural spices like cinnamon, clove, Jamaican allspice, black peppercorns, caraway, wormwood, and gentian root are added. The mixture is then left for one month to macerate in tanks. The balanced bitters have a complex and classic profile that pairs wonderfully with dark rum and whiskey.

Grab this 2-pack of bitters today!

Orange: These bitters are orange-forward and bring a zesty kick to your cocktails. The orange skin is the star here, with various spices contributing to the complexity. It's zesty, fruity, sweet, and bitter, livening up a number of mixed drinks.