Learn more
Size750mL Proof80 (40% ABV) *Please note that the ABV of this bottle may vary
Grant's Triple Wood is the direct replacement of their flagship Family Reserve whisky. Nothing has changed except for the name ― the blended whisky itself is still matured in a combination of 3 different casks: virgin oak, refill American oak, and ex-bourbon.
Notify me when this product is back in stock. 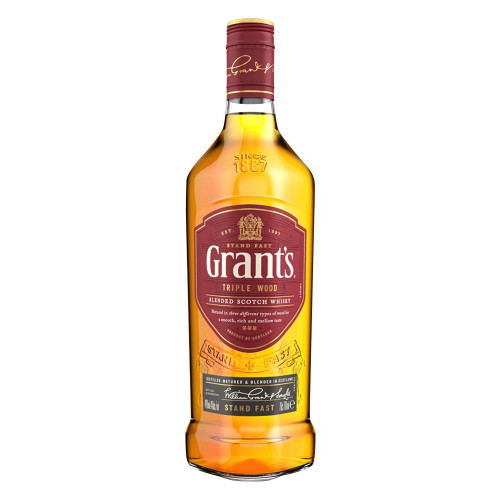 In 2018, Grant's Triple Wood Blended Scotch Whisky replaced the Family Reserve as their flagship whisky. The recipe remains the same, with the whisky aged in 3 different casks: virgin oak for the spiciness, refill American oak for vanilla and smoothness, and ex-bourbon casks for the caramel sweetness and a rich, mellow palate. The whisky comes from various William Grant distilleries, including the Girvan distillery. Bottled at 80 proof, it's an approachable and versatile blended whisky that has garnered several awards, including a Gold Medal at the 2020 edition of the Ultimate Spirits Challenge.

Get your bottle of this classic blended Scotch today!

The nose is clean, complex, and fruity with ripe pear, toffee, and nutty aromas. The palate is sweet with vanilla, honey, malty, and floral notes. The finish is long and sweet with oak and a touch of smoke.