Caskers Rewards members earn up to 164 store points back when buying this bottle.
Size1000mL Proof113.4 (56.7% ABV)
Aged for 28 years, 9 months and 11 days, this whisky — only 1,000 bottles of which were ever made — is the oldest whisky available from Glenmorangie.
Notify me when this product is back in stock.

Caskers Rewards Caskers Rewards members earn up to 164 store points back when buying this bottle. Learn more
Out of stock
Skip to the end of the images gallery 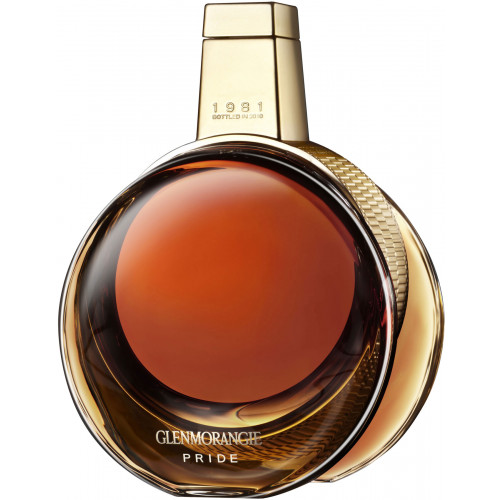 In October 1981, Glenmorangie, a world-renowned distillery located in the Highlands region of Scotland, distilled and laid down for maturation a single malt whisky in its finest first-fill bourbon casks. At the time, the intent was to create an exquisite 18-year-old Scotch. In 1999, however, Dr. Bill Lumsden, Glenmorangie's Master of Whisky Creation, sampled the whisky and noticed how well it had aged.

The same year, Lumsden — who holds a PhD in Biochemistry (he wrote his thesis paper on yeast physiology) and is the only person in the world to have been honored with Malt Advocate's "Industry Leader of the Year Award"three times — acquired a select number of Sauternes casks from the fabled vineyards of Chateau d'Yquem. Château d'Yquem Sauternes are celebrated for their complexity and sweetness, and Château d'Yquem is the only wine from the Sauternes region to be awarded the Premier Cru Supérieur rating.

Glenmorangie Pride 1981 is encased in a Baccarat Crystal decanter designed by Laurence Brabant and an oak gift case designed by Wouter Scheublin. "With a total of 28 years under its belt, this is the oldest whisky currently available from Glenmorangie," says John Hansell, the editor of Whisky Advocate. Glenmorangie Pride 1981 earned the "Highland Single Malt of the Year" award from Whisky Advocate on January 30th, 2013.

Only 1,000 bottles of this whisky have ever been made, and only a handful were allocated to the United States. Pick up this rare treasure today!

A sweet nose leads with scents of poached pears, pineapple and nutmeg. The taste continues the sweet flavors, with melon and vanilla, complementing the oak. A long, supple finish with hints of toasted almonds.