Caskers Rewards members earn up to 1 store points back when buying this bottle.

Size750mL Proof80 (40% ABV)
Matured in American oak and finished in Port wine casks from Porto Cruz, known for some of the finest fortified wine expressions in the world, this release comes with 2 tumbler glasses.
Notify me when this product is back in stock. 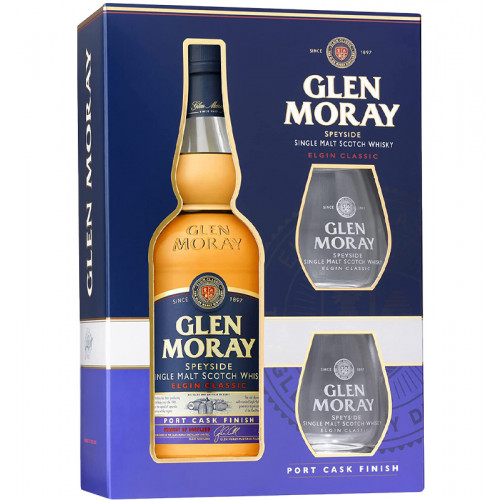 In its first life, Glen Moray was the Elgin West Brewery, until the end of the 19th century, when the brewery was reincarnated as the iconic Speyside distillery. Glen Moray was founded by Robert Thorne & Sons. Situated on the banks of River Lossie, in the Royal Burgh of Elgin, the first spirit dropped from the copper pot stills on the 13th of September 1897. There have only been 6 Master Distillers since then, which is a testament to their authenticity, and reputation for producing consistent, quality spirit. This pristine craftsmanship has been passed down through generations.

Glen Moray single malts are produced entirely onsite, in pot stills, from the distillery’s own water and malted barley ― a tradition that dates back to 1897. The whiskies mature in American oak casks sourced from North America. The result is a signature single malt with every bit of Speyside character: soft and fruit-laden. This elegant single malt is finished for eight months in Port pipes from Porto Cruz, the N°1 Port company in the world. Expect intense notes of summer fruit, dark chocolate and cinnamon, and a distinct pink hue. This gift pack contains a full-sized bottle as well as 2 tumbler glasses.

Toasted vanilla and light oak, rich dried fruits on the nose. The palate has notes of refreshing spice with a tang of citrus, and caramelized sweetness with cinnamon. The finish is lingering, with sweet spice and delicate oak.