Size750mL Proof87 (43.5% ABV)
Made from a centuries old recipe, this gin earned a score of 93 points at the Ultimate Spirits Challenge.
Notify me when this product is back in stock. 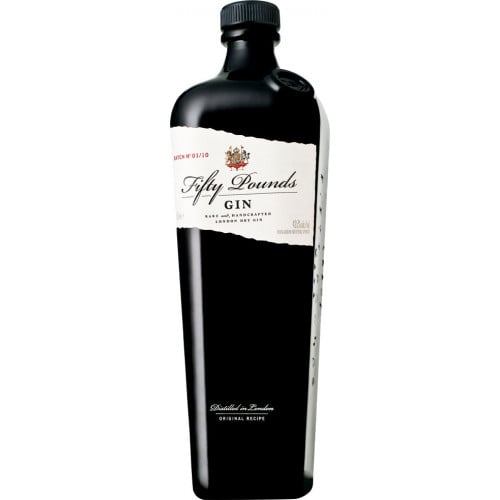 In the early 18th century, William of Orange prohibited the importation of alcohol into England. At the time, nearly all of the gin being consumed in Britain was being produced in the Netherlands. As a result of the prohibition, English citizens began crafting their own gin at home. Within a few years, one in three homes in London were making their own version of the spirit. In response to gin's popularity, King George II introduced the Gin Act of 1736 . The act levied a tax of £50 on each British citizen hoping to produce and sell gin. By 1742, only two British distilleries were in compliance with the Act and paying the tax.

Shortly after the Gin Act was imposed, a family of independent London distillers crafted a new gin recipe, which they named "Fifty Pounds" in defiance of the Act. The recipe remained lost for generations until it was discovered by the family's descendants, who recreated the gin using the same unique ingredients and traditional distillation methods the family had used centuries ago.

Today, Fifty Pounds Gin is produced at the small yet legendary Thames Distillery located in the heart of London. The gin is crafted using botanicals sourced from four different continents, including juniper berries from Croatia, coriander from the Middle East, grains of paradise from Africa, savory from France, orange and lemon peels from Spain, liquorice from Italy, and angelica root from England.

As a result, the gin has a clean and fresh aroma with hints of citrus and juniper. The aroma gives way to smooth herbal undertones, including touches of orange, grapefruit, lemon, coriander and ginger. The finish is slightly warming and crisp.

Fifty Pounds Gin earned the Double Gold Medal at the San Francisco World Spirits Competition in 2013, and a score of 92 points from the Beverage Testing Institute in 2012. In addition, it earned a score of 93 points at the Ultimate Spirits Challenge.

Clean and fresh aroma with hints of citrus and juniper. Smooth herbal undertones, including touches of orange, grapefruit, lemon, coriander and ginger. Finish is slightly warming and crisp