Size750mL Proof84 (42% ABV)
This limited-edition tequila expression is a collaboration between the tequila masters at El Tequileño and Sam Heughan, owner of The Sassenach whisky brand. After spending 2 years in American oak, it is finished in French oak for 4 months ― a nod to The Sassenach whisky. 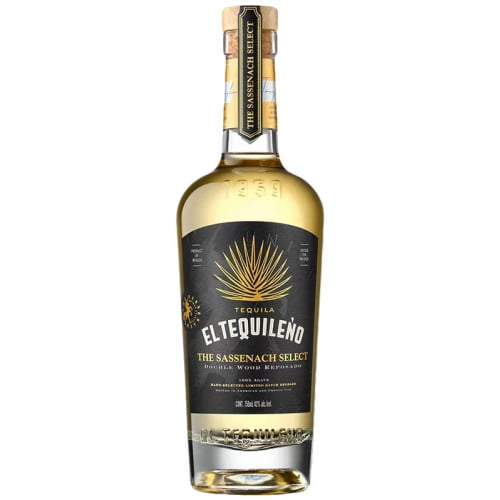 El Tequileño was born at the heart of the magical town of Tequila, Mexico, when Don Jorge Salles Cuervo founded the La Guarreña distillery in 1959. The craft of tequila making had been passed on to him from generation to generation and he carried that tradition forward, with his son joining El Tequileño in 1970, followed by his grandson in 2005. Today, El Tequileño tequila is still family-owned, with Jorge Antonio Salles, the grandson, taking over management and the title of Master Distiller. El Tequileño tequila is still produced exclusively at that very same historic distillery to this day.

With already Don Jorge setting the bar high, El Tequileño is committed to a carefully considered production process, which begins with the highest quality agaves. Sourced from the highlands of Jalisco, the region famous for its ideal growing conditions for blue agave, it takes only four hours by truck for agave to travel to the distillery. The bitter cogollo part is then removed before cooking the agave in steam pressure autoclaves, which Don Jorge pioneered in 1959. El Tequileño tequila reflects its natural surroundings with 150-year-old mango trees just steps away from open fermentation tanks and features pure volcanic spring water from the extinct Volcan de Tequila that flows through the distillery.

The Sassenach Select is a collaboration between the tequila masters at El Tequileño ― led by 3rd generation Master Distiller Antonio Salles ― and Sam Heughan, Scottish actor & producer and founder of the Great Glen Company. The small-batch limited-edition tequila is crafted with agave from the Jalisco highlands and mineral-rich water from El Volcán. It's distilled in copper-pot stills and initially aged for 2 years in American oak, then finished in French oak for 4 months ― the finishing process is a nod to Great Glen's The Sassenach whisky.

Get your bottle of this unique tequila today!

The nose is sweet, herbaceous, and earthy with cooked agave, spice, and vanilla. The palate is rich and spicy with toasted oak, a distinct nuttiness, herbs, and vanilla, culminating in an equally rich and lingering finish.