Size750mL Proof90 (45% ABV)
Based on a partnership between Dictador and Glenfarclas, this is an unprecedented and extraordinary marriage of the best rum and whiskey. This exquisite rum was distilled in 1972 before being transferred to Speyside where it was finished in port casks for 7 months.
Notify me when this product is back in stock. 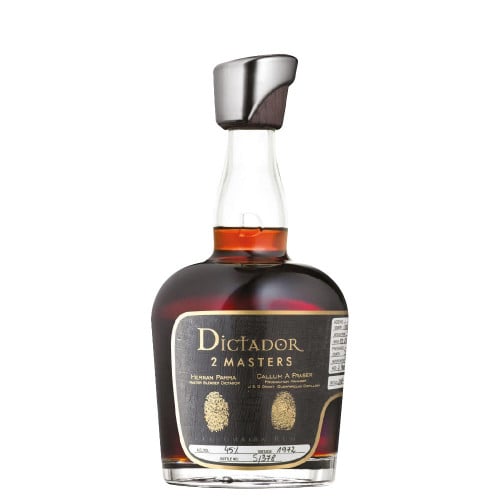 For this exquisite marriage of the best rum and whiskey, Dictador’s master blender Hernan Parra partnered with Glenfarclas’ Callum Fraser in Scotland. The story of Dictador 2 Masters Glenfarclas 1972 Colombian Rum began in 1972 when the spectacular rum was distilled. Then, it was transferred to Speyside, Scotland, where it was finished in port casks – it spent seven months in a single third-fill sherry cask that previously held 2002 vintage of Glenfarclas Scotch. Finally bottled at 90 proof, only 378 bottles of this extremely rare and one-of-a-kind marriage were produced.

The nose greets with malted barley, sherry notes and dried apricots aromas. Maple syrup and brown sugar in the background- The palate is well-rounded and rich with dried fruits, raisins, and acacia honey. The finish is balanced and brings flavors of toffee, sweet tobacco, and toasted coconut.