Be the first to review this product
Made from a secret recipe of whole-leaf black tea and five different organic herbs and spices, this liqueur earned the Double Gold Medal at the 2011 San Francisco World Spirits Competition.
Add to Wish List
Notify me when this product is back in stock.

In a nondescript warehouse situated in the foothills of Colorado's Front Range Mountains, Kristian Naslund is busy at work macerating the herbs and spices he'll need to produce a batch Dancing Pines Chai Liqueur. "It's really chilly in the morning in Colorado," says Naslund, Dancing Pines' master distiller, "and so my wife used to make me chai for breakfast. She used whole-leaf black tea and some other ingredients, and so the chai was incredible. That's how we got the idea to make a traditional chai liqueur."

Dancing Pines Chai Liqueur, which is based on Naslund's wife's recipe, is made from whole-leaf black tea and a secret recipe of five herbs and spices, including cinnamon, nutmeg and cloves. Naslund sources only organic ingredients, and purchases from local farmers whenever possible. "All of our ingredients are whole products, meaning we don't use any extracts or artificial flavoring to make our liqueurs," he says.

After purchasing the whole-leaf black tea, herbs and spices, Naslund makes a corn-based distillate using proprietary strains of yeast. He infuses the distillate with the tea, herbs and spices inside his hand-hammered, traditional copper alembic pot still that he nicknamed "Paso Doble." (Paso Doble, meaning "double step," is a type of music that is typically played during Spanish bullfights.) "We balance the flavors from the tea and spices carefully," Naslund adds, "because we want to create a rich and authentic chai flavor."

After distillation, Naslund discards the heads and tails of the liqueur and brings the hearts to proof using pure Rocky Mountain snowmelt. Each bottle of chai liqueur is then filled and individually numbered with its batch and bottle number.

Dancing Pines Chai Liqueur has an aroma of fresh, authentic chai, along with hints of cardamom and pepper. The palate opens up to sweet notes of cinnamon and nutmeg which are nicely balanced by subtle undertones of spicy tea and clove. The finish is long and slightly sweet, but ends with a kick.

Dancing Pines Chai Liqueur earned the Double Gold Medal at the 2011 San Francisco World Spirits Competition and earned a score of 96 points from Wine Enthusiast. Pick up a bottle today!

Dark amber hue. Aroma of authentic chai, with hints of cardamom and pepper. Flavor is nicely balanced between sweet and spicy — notes of cinnamon, nutmeg and cloves play well against the notes of black tea. 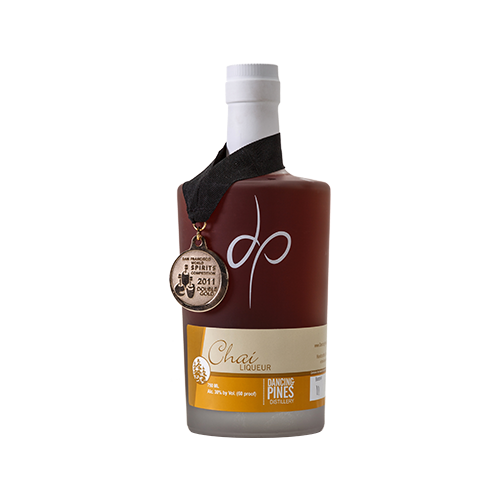