Size1420mL Proof14 (7% ABV)
This classic Whisky & Cola cocktail is made with Crown Royal Whisky's smooth spirit, cola, natural flavors, and caramel sugar. Each four-pack contains 4 12 fl. oz. cans.
Notify me when this product is back in stock. 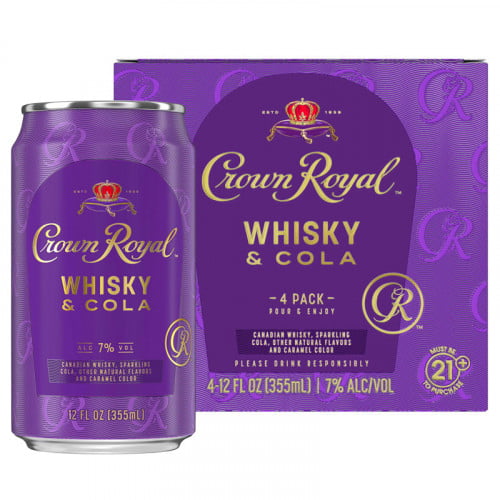 They also have the Flavor Series of four flavored whiskies of Crown Royal, including Salted Caramel, Vanilla, Apple, and Peach. Recently they have joined the canned cocktail game with 3 ready-to-drink cocktails: Whisky & Cola, Peach Tea, and Washington Apple Whisky. They all feature Crown Royal Whisky as their base. The Whisky & Cola is combined with cola, natural flavors, and caramel sugar.

The classic Crown Royal Whisky's smoothness and creaminess serve as the base for this canned cocktail with cola, natural flavors, and a refreshing caramel sweetness.