Size750mL Proof70 (35% ABV)
The Crown Royal Regal Apple Flavored Whisky is a blend of some of the highest quality Crown Whiskies. It's infused with Regal Gala Apples and natural apple flavors for a juicy, fruity, and crisp profile.
Notify me when this product is back in stock. 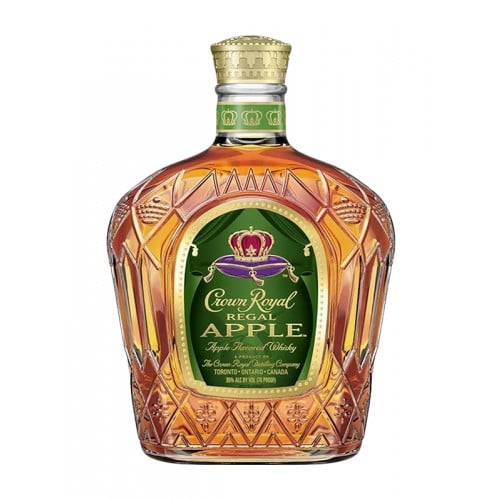 In 1939, King George VI and Queen Elizabeth made history when they became the first reigning monarchs to journey across North America, traveling from Quebec City to Vancouver by train. Prior to their arrival, a local entrepreneur set out to craft a whisky that the King and Queen could enjoy in the privacy of their rail car. After sampling over 600 different blends and sifting through hundreds of different types of glass, labels, and bottles, the entrepreneur created what he believed to be the perfect whisky and called it Crown Royal. At the beginning of their journey, the King and Queen were gifted ten cases of the whisky from Canada to enjoy on their journey.

This Flavor Series expression is one of four flavored whiskies of Crown Royal, including Salted Caramel, Vanilla, and Peach. Crown Royal is crafted from some of the purest water sourced from Lake Winnipeg, naturally filtered through the limestone beneath and a grain blend of rye, corn, and barley. Approximately 80% of the grain used in production is sourced from Manitoba and the surrounding area. Crown Royal’s signature blend is distilled through twelve distillation columns. After the whiskies have been expertly aged, they are blended meticulously.

The Crown Royal Regal Apple is a blend of some of the highest quality Crown whiskies, hand-selected by Crown Royal Master Blenders. The expression is infused with Regal Gala Apples and natural apple flavors, before being bottled at 70 proof. This fruity and crisp Canadian whisky has bright apple and spice aromas. The persists through the decadently smooth finish and the sweetness is never overpowering.

It's a juicy, fruity, and crisp profile that opens with bright apple and spice aromas. The caramel and a light spice on the palate provide a solid whisky backbone for the tart apple flavor. The latter persists through the smooth finish with a balanced sweetness.