Size1420mL Proof14 (7% ABV)
Conveniently canned, this ready-to-drink cocktail uses Crown Royal Whisky as its base. The addition of the flavor of fresh peaches, tea, and other natural flavors make for a refreshingly fruity cocktail. 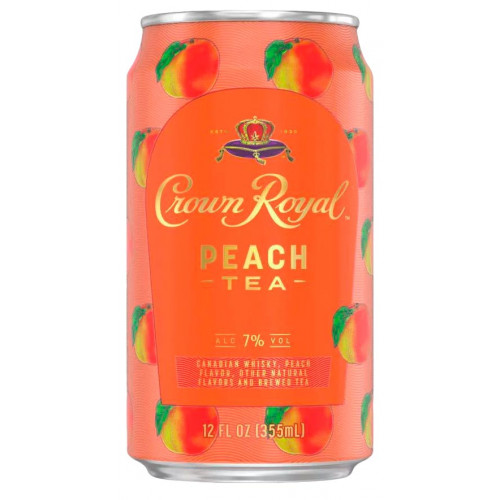 They also have the Flavor Series of four flavored whiskies of Crown Royal, including Salted Caramel, Vanilla, Apple, and Peach. Recently they have joined the canned cocktail game with 3 ready-to-drink cocktails: Whisky & Cola, Peach Tea, and Washington Apple Whisky. Built on a solid foundation of Crown Royal Whisky, the Peach Tea Whisky Cocktail adds the flavor of fresh peaches, brewed tea, and other natural flavors. It comes in a convenient 4-pack of 12 fl. oz. cans.

Crown Royal Whisky serves as the base for this canned cocktail with its smooth and creamy profile. A fresh, fruity, and peachy sweetness is immediately apparent and balanced with a freshly-brewed tea note.

3.4 out of 5
(3 reviews)
Write a review
Real email address is required to social networks
Sign in
Login with Google
Login with Facebook
Or
We also recommend