Size1420mL Proof18 (9% ABV)
Loyal Nine is a range of canned cocktails that is all about natural flavors and ingredients. Real corn-based vodka and real lemons are used in this citrusy and refreshing Lemonade cocktail with 9% ABV.
Notify me when this product is back in stock. 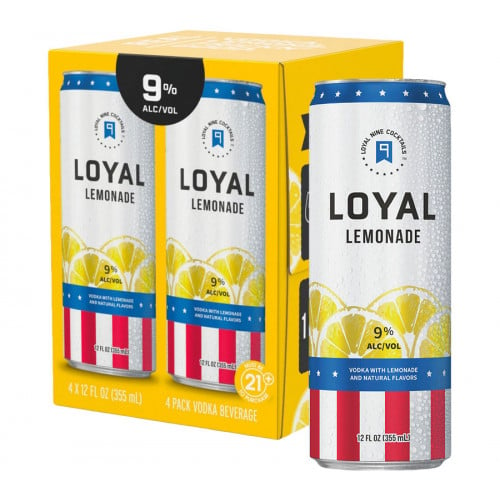 In 2018 they launched Loyal 9, a brand of ready-to-drink canned cocktails. In the vein of the rebellious spirit that inspired both the company and the brand, their goal was to rebel against fake ingredients. Currently, the lineup consists of 4 cocktails: Lemonade, Mixed Berry, Lemonade + Iced Tea, Watermelon, and Apple Cider ― the newest addition to the lineup. These are all crafted with real corn-based vodka and real lemons that make for a refreshingly crisp drink. The non-carbonated drinks are 9% ABV and come in sleek, 12 fl. oz. cans. Since 2021, the brand is owned by Diageo.

Loyal Nine Lemonade is a refreshingly bright drink with a pleasantly gentle sweetness. As delicious as it is convenient, the ready-to-drink cocktail comes in a pack of 4 cans. Simple and simply perfect!

Get your 4-pack of this refreshing cocktail today!

The nose is bright with plenty of citrusy aromas. The palate is refreshingly crisp with a balance of gentle sweetness and tartness that culminates in a clean and moreish finish.