Size600mL Proof10 (5% ABV)
The perfect blend of the original Aperol, sparkling prosecco, and seltzer is now available in this ready-to-drink version by Campari. Aperol Spritz is the perfect aperitivo to enjoy with your friends on a summer day. 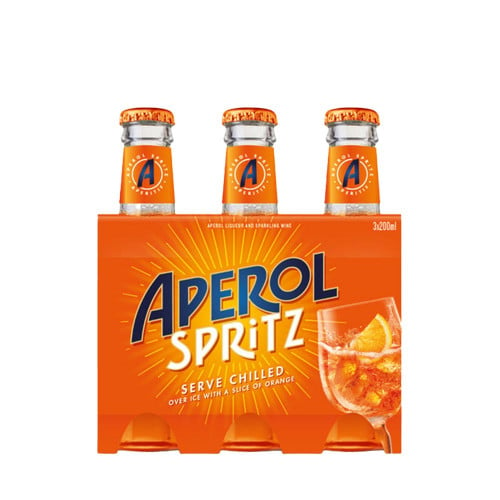 Aperol Spritz is arguably the most popular "aperitivo" ― a social late afternoon pre-dinner drink. A perfect blend of the original Aperol, sparkling prosecco, and seltzer, this refreshing cocktail is now available in a ready-to-drink version, made by Campari. Instantly recognizable by its bright orange color, this 3-pack brings you all the bitter, sweet, and herbal flavors that make it one of the most beloved social drinks in the world. Enjoy in a large wine glass, poured over ice, with your friends, on a hot summer day.

Get Aperol Spritz 3-pack and toast with friends!

When liquorist Gaspare Campari invented the red aperitif in 1860 in Milan, Italy he couldn't have imagined what a large player the Campari Group would become. His bars and liqueurs soon became known far and wide, but it wasn't until his son Davide took over that the company got the focus it needed. He built the brand around two drinks ― the Campari bitter and Cordial Campari ― channeling all the marketing into making them known worldwide. It was in 1932 that Campari Soda would launch its signature bottles that have remained the same to this day.

In the 1990s, the group began to expand considerably, acquiring several iconic liqueurs, vodka, gin, rum, tequila, whiskey, cognac, wine, and mixed-drink brands. Today, the company is the 6th largest player in the world with 18 manufacturing plants around the globe as well as several wineries. Its headquarters are located in Sesto San Giovanni, Italy, where its very first plant was built in 1904.
Explore all Aperol bottles >>

Bright orange color. Bitter, sweet, and herbal flavors of Aperol mingle with the bubbly character of sparkling prosecco on the palate. Refreshing and bitter sweet finish.