Corsair has recently changed its designs, and as the original labels are being phased out, there is still a chance that you might receive a bottle different than what is in the picture. Rest assured, the liquid remains the same, regardless of the design. 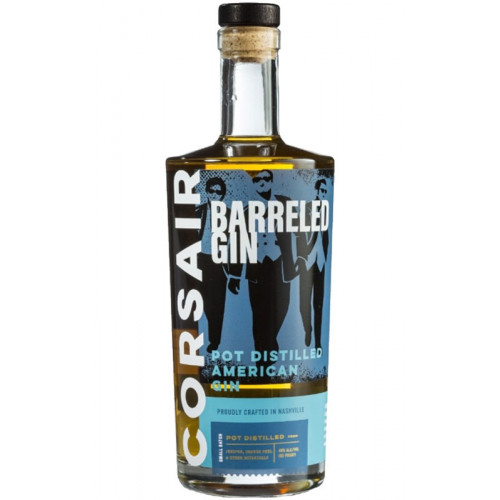 In order to craft a more traditional gin, "we've rested our signature vapor basket gin in our charred oak barrels previously used to age our spiced rum," says Darek Bell, the founder and master distiller at Corsair Artisan Distillery. Since opening its doors in 2009, Corsair has received numerous accolades and awards, including being named the 2013 Craft Distillery of the Year and 2013 Innovator of the Year by Whisky Magazine.

As a result of this barrel aging, together with its citrus-heavy botanical recipe, the gin has a bold aroma of cola, anise, sweet spices and and oak. The aroma gives way to notes of tropical fruits, vanilla, citrus and candied nuts on the palate, and finishes with a touch of ginger and licorice.

Once the gin has matured, each bottle is filled, labeled and then boxed by hand. "We make less in a year than a big distillery spills in a day," says Clay Smith, Corsair's Distillery Manager. Corsair Barrel Aged Gin earned the Gold Medal at the San Francisco World Spirits Competition in 2011.

Bold aroma of cola, anise, sweet spices and and oak. Notes of tropical fruits, vanilla, citrus and candied nuts on the palate. Finishes with a touch of ginger and licorice.