Be the first to review this product
A bottle with a good cause: a portion of these bottle sales go towards supporting their local LGBTQ community center. At the core of Corgi's lineup, this creamy vodka serves as the backbone for all their award-winning small-batch gins.
$40.99
Add to Wish List

Founded in 2017 by Bob Hagemann and owned by his parents Bob and Nancy, Corgi Spirits is a family-run craft distillery, the first and only one in Hudson County New Jersey. It was Hagemann's fascination with all things British that led to the company's logo, a Corgi wearing a crown. The breed perfectly represents the nature of the distillery. Playful and fun, yet regal and distinguished as well, the breed being owned by the Queen of England herself.

The distillery was named New Jersey Distillery of the Year twice in a row and their small-batch spirits have garnered several other awards. Their range goes from gin (Earl Grey Gin, Pembroke Gin, and Barrel-Rested Gin) to whiskey (Cardigan Whiskey), vodka, to seasonal spirits such as the Very Merry Gin, Bee Blossom Gin, and Garden Party Gin. The gins and vodkas are made from potatoes, making them super-smooth as well as gluten-free. If you're in the area they offer tours and tastings in their tasting room and on their outdoor patio.

Corgi Saddlecoat Pride Vodka is the special edition of their Saddlecoat Vodka, released during the summer months to support inclusivity for all. This is a bottle with a good cause, since a portion of these bottle sales go towards supporting Hudson Pride Center, their local LGBTQ community center. Saddlecoat Vodka is at the core of most of Corgi spirits, serving as the backbone for their impressive gin lineup. Distilled 6 times from potatoes instead of cheaper alternatives like corn, the vodka is bottled at 80 proof. It's a creamy, full-bodied, and smooth small-batch spirit that feels luxurious over an ice cube and serves as an exceptional base for premium cocktails.

Distilled 6 times from potatoes, this is a creamy and full-bodied vodka that is exceptionally crisp and pure with plenty of depth. Finishes long and smooth.

This product is available in:   NY 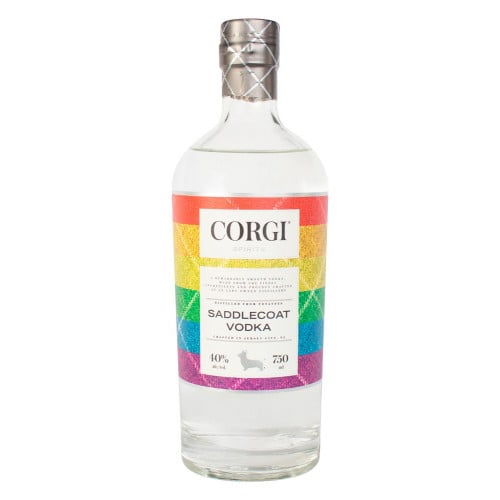