Size750mL Proof80 (40% ABV)
Collingwood Hand-Crafted Canadian Whisky received a gold medal from the Beverage Tasting Institute, which awarded it an outstanding 94 points.
Notify me when this product is back in stock. 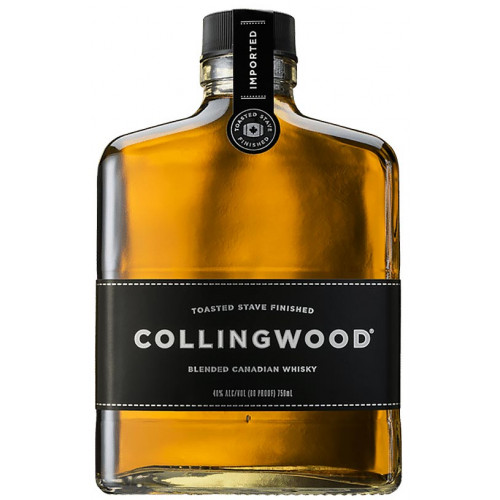 During the last Ice Age, a glacier driven south into Canada carved a perfect basin out of the granite Ontario bedrock. A millennia later, as the glacier retreated, it left the granite basin — known as Georgian Bay — behind. Today, Georgian Bay is surrounded by evergreen forests, fertile farms and the Blue Mountains, and represents one of the largest sources of pure freshwater in North America. In 1967, Canadian Mist Distillery, which is situated in the town of Collingwood, became the first distillery in the world to source its water from Georgian Bay.

Collingwood Hand-Crafted Canadian Whisky is made from a blend of just two whiskies, each of which is distilled three times through the distillery's own copper pot stills. After distillation, the blended whisky is double-barreled, or finished, in toasted casks coopered from Canadian maple trees. Maple trees have a unique natural chemistry that helps Collingwood Rye maintain an "exemplary taste," says Chris Morris, Canadian Mist's master distiller. Unlike other sources of wood, maple has only trace amounts of calcium, potassium or tannic acid " all of which react harshly with the natural acids found in rye whiskies. In addition, the flavorful maple trees contribute a slightly sweet yet authentic flavor profile to the whisky.

After its secondary rest in maple-coopered casks, Collingwood Hand-Crafted Canadian Whisky is brought to proof with spring water sourced from Georgian Bay. As a result, the whisky has a stunning aroma, with hints of graham cracker, vanilla and oak, as well as a slight floral scent. The whisky is incredibly smooth on the palate, with notes of creamy butterscotch, maple and brown sugar. The finish is lingering and soft, displaying flavors of applesauce, cinnamon and cedar wood.

Collingwood Hand-Crafted Canadian Whisky received a gold medal from the Beverage Tasting Institute, which awarded it an outstanding 94 points.

This stunning whisky comes in one of the most unique bottles on the market.

Pick your up today!

Stunning aroma, with hints of graham cracker, vanilla and oak, as well as a slight floral scent. Incredibly smooth on the palate, with notes of creamy butterscotch, maple and brown sugar. Finish is lingering and soft, displaying flavors of applesauce, cinnamon and cedar wood.