Learn more
Size750mL Proof80 (40% ABV) *Please note that the ABV of this bottle may vary
Matured for 21 years, this rye whisky was finished in toasted casks coopered from Canadian maple trees.
Notify me when this product is back in stock. 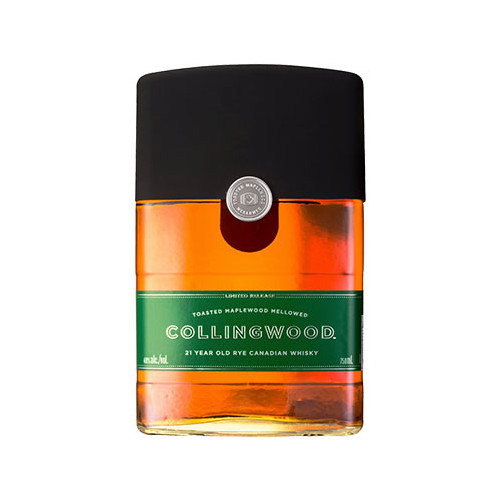 Collingwood 21 Year Old Rye Whisky is crafted exclusively from rye grains harvested in Ontario's fertile farmland. Once the grains are harvested, they are milled and mashed before being fermented with a proprietary strain of dry yeast. Then, the wash is distilled thrice through the distillery's copper stills.

After distillation, Collingwood 21 Year Old Rye is matured for 21 years — it is legally old enough to drink itself — in oak casks. Following its initial beauty rest, the whisky is double-barreled, or finished, in toasted casks coopered from Canadian maple trees. Maple trees have a unique natural chemistry that helps Collingwood Rye maintain an "exemplary taste," says Chris Morris, Canadian Mist's master distiller. Unlike other sources of wood, maple has only trace amounts of calcium, potassium or tannic acid — all of which react harshly with the natural acids found in rye whiskies. In addition, the flavorful maple trees contribute a slightly sweet yet authentic flavor profile to the whisky.

After its secondary rest in maple-coopered casks, Collingwood 21 Year Old Rye is brought to proof with spring water sourced from Georgian Bay. As a result, the whisky has a spicy aroma, with hints of caramel, raisins and vanilla. The aroma gives way to notes of rye, roasted nuts and complex oak on the palate, which are complemented by a subtle hint of honey sweetness. The finish is lingering and soft, with notes of citrus.

"Collingwood Rye 21-Year-Old is a rare style of Canadian whisky," says Brand Manager Pedro Berrueco. "This special offering is exceptionally well-balanced and creates a unique flavor profile due to its toasted maplewood finish combined with a 21-year maturation period."

This limited-edition whisky is being bottled only once. Pick up a bottle today!

Spicy aroma, with hints of caramel, raisins and vanilla. Notes of rye, roasted nuts and complex oak on the palate, which are complemented by a subtle hint of honey sweetness. Finish is lingering and soft, with notes of citrus.