Learn more
Size750mL Proof92 (46% ABV) *Please note that the ABV of this bottle may vary
This is a unique gin expression from the French Maison Ferrand and Master Distiller Alexandre Gabriel. Caribbean sugar is caramelized, aged and added to their barrel-aged Réserve gin.
Notify me when this product is back in stock. 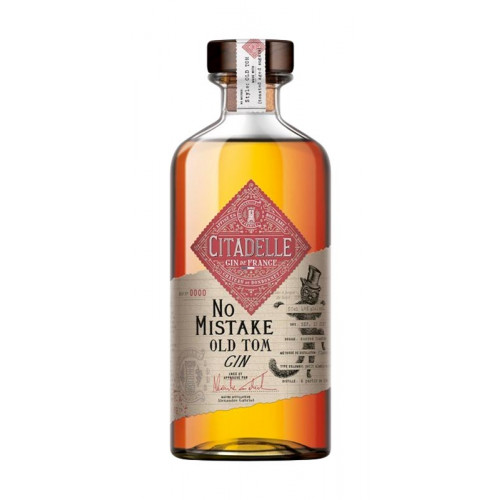 About 30 years ago Alexandre Gabriel took over Maison Ferrand, the renowned cognac house in France. In 1996, he created Citadelle, the first artisanal Gin de France. "Barrel aging tends to tame the flower and citrus feel of gin and enhances its rounder and softer notes", he explains. Nearly a century ago, nearly all gin was barrel-aged since the spirit was stored and transported in oak barrels (at the time, glass was too fragile while plastic and stainless steel vessels were still not available). In order to craft a more traditional gin reminiscent of the gins crafted hundreds of years ago, Gabriel began experimenting with aging gin in 2008.

Citadelle No Mistake Old Tom Gin was first released in October 2016 as a limited edition expression in the Extremes collection, which releases new innovative spirits every year from the Citadelle range or from other Maison Ferrand brands. At first, 6,500 bottles were released but the expression proved to be wildly popular, which led to No Mistake Old Tom Gin becoming part of the permanent Citadelle range.

A sweeter style of gin that used to be popular in the 19th century, Citadelle No Mistake Old Tom Gin is made with a Caribbean brown sugar. The sugar is toasted to caramelize and then aged for three to four months in wooden casks. Only then it is added to the Citadelle Réserve Gin base, which is a barrel-aged version of their standard gin. The final mixture spends additional four months into casks for proper absorption. Bottled at 92 proof, this is a gin of a golden straw color and aromas of raisin, cinnamon and citrus. The palate is rich and sweet with more flavors of ripe fruits and exotic spice. A truly unique gin expression.

Golden straw hue. Aromas of raisin, orange, cardamom and jasmine. The palate is rich and lush with notes of almond, cinnamon and nutmeg. The finish is floral and spicy.