Size750mL Proof116 (58% ABV)
Certified organic and kosher, this single-barrel rye is made in Virginia's wine country from 100% rye grains and bottled at cask strength.
Notify me when this product is back in stock. 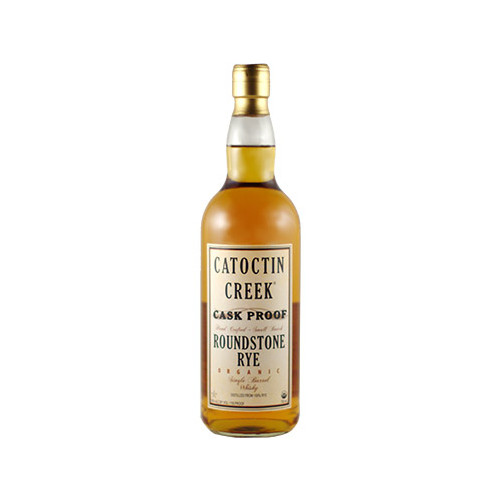 "I felt every bounce and every pothole on that entire road like they were tank traps," says Scott Harris, who found himself personally delivering the first shipment of Catoctin Creek Distilling Company spirits in a pickup truck. "I must have pulled over to check the bottles in the truck six different times," he says with a laugh. Together with his wife, Rebecca, Scott founded Catoctin Creek Distilling Company Distilling Company in 2009. Located in Purcellville, Virginia (population: 7,727), the distillery — situated in the heart of Virginia's wine country — is surrounded by the vines of over thirty different wineries.

Scott, who graduated from Georgia Tech and previously worked as a software engineer, handles the marketing and distribution of Catoctin Creek Distilling Company spirits. Rebecca, who received a degree in chemical engineering from the University of Wisconsin and worked for years as a chemist at Amoco Foam and CIBA Vision, does "the lion's share of the distilling," Scott sheepishly admits.

Catoctin Creek Cask Proof Roundstone Rye is made exclusively from organic rye grains. After slowly fermenting the rye for five to seven days — the slow fermentation process results in a more mellow drink — Rebecca distills the mash in a custom-made 400 liter Kothe hybrid pot-column still. "Scott likes to compare it to a German sports car," she says, "and really, it handles incredibly well." The spent rye grains are collected and given away to local farmers, who use it as feed for their cattle and livestock.

After distillation, the rye whiskey is aged in new, white American oak barrels for approximately two years. The barrels, which are made by a cooperage in Minnesota, are made using beeswax rather than paraffin as a sealant. "We use organic products because there's a taste to chemicals," Scott says, "and that stuff gets concentrated in the distillation process and comes out in the spirit. We don't want any of that stuff infecting our flavor." Once the whiskey has matured, it is bottled at cask strength (116 proof).

The rye has a spicy aroma of oak, cloves and chili peppers that is complemented by a touch of fresh herbs. Notes of caramel, spicy toast, rye bread and citrus dominate the palate, and lead to a finish that is surprisingly sweet.

Spicy aroma of oak, cloves and chili peppers that is complemented by a touch of fresh herbs. Notes of caramel, spicy toast, rye bread and citrus dominate the palate, and lead to a finish that is surprisingly sweet.