Size750mL Proof80 (40% ABV)
A porcelain decanter, designed in 1985 for the Carlos I Imperial brandy by Lladró, a renowned Spanish producer of high-end home accessories and decorations from porcelain.
Notify me when this product is back in stock. 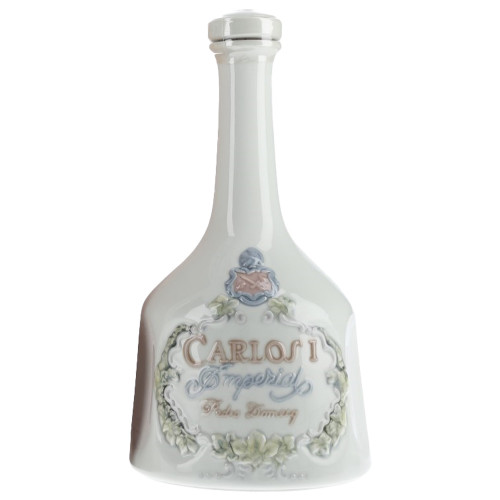 About Carlos I Imperial Lladro Brandy

Lladró is a Spanish company that produces high-end lighting, home accessories, jewelry, decorative sculptures and figurines from porcelain. Inspired by the works of the great European manufacturers of Meissen, Sèvres and Capodimonte, three brothers, Juan, José and Vicente Lladró, started making porcelain plates, vases and figurines in their home village of Almàssera in 1953. By the end of the decade, Lladró had opened its first store in Valencia. Over the next two decades, the company established its unique and distinctive style that made it popular among collectors around the globe. It founded a school to train its artists and expanded to new markets in Americas, Asia and Eastern Europe.

In 1985, Lladró designed a decanted for the Carlos I Imperial brandy, produced by Pedro Domecq, a winery based in the Jerez region in the south of Spain. Pedro Domecq became part of the Pernod Ricard group in 2005, and was later partitioned off and sold to several buyers, with the Osborne group acquiring the winery and the rights to its brandies and sherries, including the Carlos I brand in 2008. The story of Carlos I goes back to 1889, when a cellar master found some very old casks containing brandy in a corner of his cellar. Tasting the brandy, he immediately recognized its potential. Carlos I, named after the 16th century Spanish king also known as Charles V of the Holy Roman Empire, is a line of brandies de Jerez. Brandy de Jerez must be produced in the Jerez area of Andalusia, and aged in 500-liter American oak casks that previously contained sherry, using the Solera system. Solera is a process of aging liquids by fractional blending in such a way that the finished product is a mixture of ages, with the average age gradually increasing. This allows cellar masters to maintain a reliable style and quality over time.

The porcelain bottle was designed to hold Carlos I Imperial, the extra old expression from the legendary Spanish brand. The decanter, retired in 1991, comes in a wooden box with a porcelain plaque.

Get your unique piece of history!

Aromas of oak, with hints of walnut, fig, and hazelnut on the nose lead to a silky palate. The finish is luxurious and sophisticated.