Size750mL Proof124 (62% ABV)
This 124-proof brandy is a blend of carefully selected reserve casks that was aged in Kentucky bourbon and new American oak barrels. The resulting taste profile is uniquely American in how it flirts with bourbon.
Notify me when this product is back in stock. 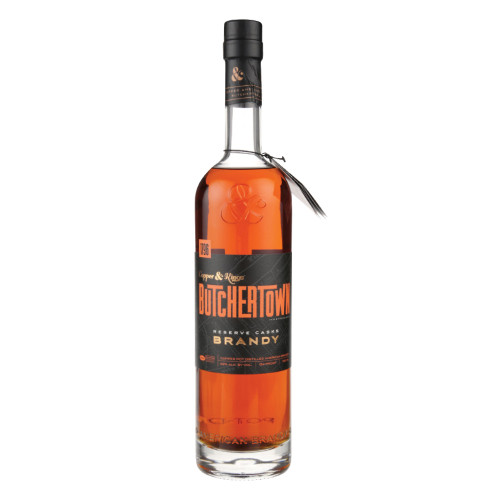 Copper & King American Brandy Company is a spirits producer situated in the northern part of Louisville, KY, adjacent to the Ohio River and a stone's throw away from Indiana, in the picturesque neighborhood of Butchertown. As the name suggests the town used to be home to butchers and brewers, but has since shifted to a haven for artists, artisans, and distillers. Copper & Kings produce a variety of American Brandy, Absinthe and Gin.

The label has pioneered the American brandy movement, a spirit largely associated with European markets. Their aged grape brandy is matured in a combination of 90% Kentucky bourbon whiskey barrels, and 10% medium-char new American white oak barrels, delivering a paradigm-shifting new world of brandy that is distinctively American. The result is a smooth and aromatic spirit with a bold rebellious character.

Their own stock of spirit distilled in Butchertown started entering the bottled blends in 2018. Using traditional copper pot-distillation they forge non-traditional craft-distilled, natural, pure pot-still American brandies. Inspired by American whiskey and American music, Copper Kings utilizes a "low & slow" distillation technique, which requires a relatively low distillation temperature, allowing for a longer, slower distillation and maximum copper contact, to impart a fruit intensity and concentration of flavors and aromas onto the spirit.

The Butchertown Brandy expression is a blend of carefully selected reserve casks. 75% of it was aged in Kentucky bourbon barrels, while the rest was aged in new American oak. It's non-chill filtered and has no artificial coloring and additives. Bottled at 124 proof, it's a uniquely American brandy that flirts openly with bourbon.

The nose is reminiscent of bourbon with dark fruit notes and a pleasant sweetness. There's honey and oak on the palate along with more fruity notes. Finishes dry and long with lingering oak notes.